A BBC Performing Arts Fellow in 2015 and a 2016 Horizon Award nominee at the Radio 2 Folk Awards, Rosie has become more than purely a traditional singer. Having started learning folk songs at an early age from her family, Rosie has a keen interest in the history of traditional songs, particularly those of her native Wiltshire, where she has spent time researching in the local archives and developing a broad repertoire of local songs.

“I have tried to depict the beautiful and the actual”, wrote Alfred Williams in 1923 in the introduction to his book Folk Songs of the Upper Thames. Williams not only provided the title for Rosie’s debut solo album but also the starting point for Rosie’s research into Wiltshire song. Williams did not collect melodies which further inspired Rosie to write her own tunes and, more recently, whole new songs that balance perfectly with the old material to make up The Beautiful and The Actual.

“She has a magical voice, an awareness of her roots, a sense of fun on stage, and of course, makes the most marvellous music” R2 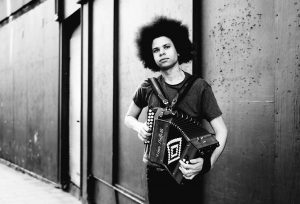 Cohen Braithwaite-Kilcoyne is a folk musician and singer. Cohen has been a musician since the age of 6 and took to squeezeboxes in his teens and has since developed into a fine player of both the melodeon and anglo concertina. As an instrumentalist Cohen is experienced in playing for dancing, playing as part of groups, both as an accompanying and as a lead instrument, and playing as a soloist. Cohen is also a well-regarded singer and in 2014 won Bromyard Folk Festival’s Future of Young Folk Award for singing.

Cohen’s solo repertoire consists mainly of traditional songs with accompaniment from anglo concertina or melodeon. Alongside this Cohen also performs traditional tunes and the occasional un-accompanied song. Cohen’s style, approach and repertoire is rooted in the English tradition, however material and influences from Scottish, Irish, American and European traditions are also present in Cohen’s performance.