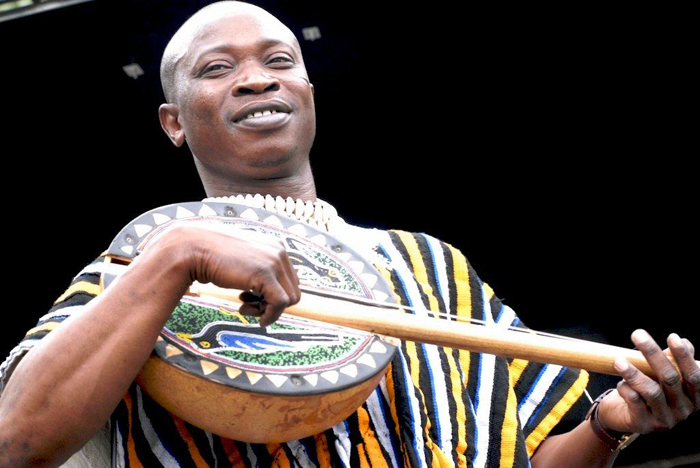 Atongo Zimba was born in Ghana in 1967. His grandfather taught him how to build and play his koliko, a two-stringed calabash lute, and the first songs he learned were rooted firmly in tradition. He was also exposed to African popular music on the radio, and like many of his contemporaries, he was enthralled by the sounds of Fela Kuti’s afrobeat. Afrobeat inspired him so much he decided to explore the musical idioms of the surrounding regions, and after travelling through several West African countries, his wanderings brought him to Fela Kuti’s Shrine Club in Lagos, Nigeria. Atongo was playing at a nearby market, when some of Fela’s disciples noticed him and brought him to the master himself, and for the next 2 years, he was the opening act at the Shrine club shows. Returning to Ghana, Atongo played at venues all over the capital and opened for many great African musicians including Osibisa, Manu Dibango, Hugh Masekela and Angelique Kidjo.

His albums have received worldwide critical acclaim, and showcase Atongo’s versatility as a musician. Ranging from modern Afro-fusion, to his latest album, ‘Barefoot in the Sand’ which marks a return to his rural roots, yet also incorporates instruments like the tabla, the flute, and the saxophone, creating a Arabic-Indian-African groove: “It is fresh, it makes the heart sing and dance, and more than anything it is filled with talent” BBC – Africa On Your Street

“Another stepping stone towards the affirmation that Zimba is the new face of Ghanaian music” Mondomix, France

“Barefoot in the Sand is an extremely talented singer’s love affair with the various components that dominate West African music. Indispensible, perhaps legendary, a top 10 definite.” The Beat