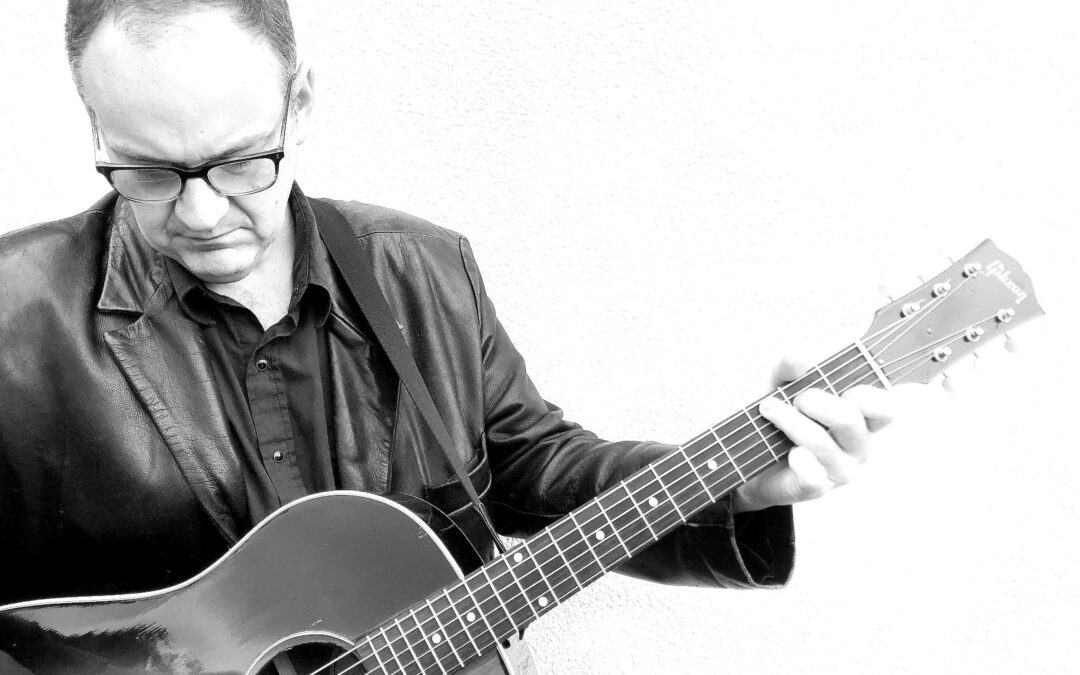 “We could wait forever for the right time” declares BOB COLLUM on the introductory track to his latest album. Assuming the view that there is no time like the present to showcase a creative body of work, the lyric is both timely and self-assured of releasing new recordings during a global pandemic. ‘This Heart Will Self Destruct’ arrives with the sense of promptitude that the title suggests, due via Fretsore Records on [DATE]. In a tumultuous world where we anticipate the resumption of unhindered productivity, for artists the creative clock does not stop.

Born in Oklahoma, the now Essex-based Bob Collum is a self-proclaimed Anglophile since his teenage years. Raised by his grandparents on the likes of Bob Wills and The Carter Family, Collum quickly embraced the sonic-fusion of transatlantic influences brought through the ongoing ripple effect of The Beatles. What results is a combination of these influences in his own artistic output; home-grown, transatlantic and British are all evident here. Collum reflects writing the album “began life on the cusp before the insanity of 2020” with much of the recordings done intermittently with safety taking priority. Initially intended as an EP, the sessions resulted in a full length follow-up to the 2018’s Pay Pack and Carry.

With lyrics such as “hold your breath, jump right in”, Collum and The Welfare Mothers return with the invitation to dive head-first on opening track ‘Parachute’. But while this lyric has razor-precision, the themes of the album range broadly. “I think the album captures the last year quite well; songs about anxiety, hope, fear, humour, uncertainty, love, disappointment, redemption, faith, more uncertainty, more fear, more hope etc.”, Collum states, which additionally can be interpreted through themes of perseverance of the human spirit, obstacles and struggles, karma, broken dreams, unrequited love, destructive relationships, and insouciant escapism.

Early tastes of the album include the Johnny Cash-inspired single, “From Birmingham” which received support on the likes of Meridian FM, Soho Radio, Cambridge 105 and CMR Nashville. The 9 original songs are accompanied by a remake of the gospel-flavoured tongue-in-cheek Leiber and Stoller hit ‘Saved’. Recorded and popularised by LaVern Baker, and later covered by Joe Cocker and Elvis Presley himself, this interpretation sits more than comfortably at the table with these originals.

All the while, it’s the honky-tonk-inflused title track that thematically aligns with the destabilised state of the world, conjuring up images of the intro-theme from the early Mission Impossible TV series, like dynamite on a smoking wick creating a sense of imposing urgency.
“It’s basically a tongue in cheek warning that the protagonist will ruin everything before anyone else gets a chance to. I think we have all been in that position at least once in our lives. The band give a brilliant performance and I think we make a dark and pessimistic view of life quite danceable.”

A collaborative affair, Collum attributes the world-class musical standard to his band The Welfare Mothers and its honorary members; “The Welfare Mothers, with Paul Quarry on drums, Mags Layton on violin and vocals, and Martin Cutmore on bass brought these songs to life in a way that any singer-songwriter would give their eye teeth for. We were joined on these tracks by honorary Welfare Mother Martin Belmont on the flying Fender Stratocaster and Fender VI bass.” Embracing the new-normal of virtual collaboration, Collum worked with Peter Holsapple (the dBs, REM). “Peter added soulful Hammond B-3 and raucous harmony vocals to the track “Spare Me” which was an intercontinental collaboration between Peter and myself. Pat Collier captured it all beautifully and his wit and patience was much appreciated as always.”

It may be a broad church to embrace everything from early influences of rockabilly such as Bob Wills to Buddy Holly, to power pop and contemporaries such as REM and Let’s Active, however Collum’s palette seamlessly embraces these as if they were corners of the same coin, culminating into a diversity of genres and sounds, in a variety that gels cohesively. All the above coalesce on tracks like “Spare Me” and “Tall Glass of Muddy Water”, where such a range of influences are seamlessly fused, combining into a collection of contemporary Americana,

“I think the album captures the last year quite well. I have treasured the chance to make music during these strange times and have even oddly embraced the process of creating in a new way. I can never thank the Welfare Mothers enough for their friendship and dedication. Martin Belmont and Peter Holsapple are collaborators that I could only dream of working with all those years ago. Hope you dig what we’ve done!”

With live shows on hiatus, this album takes its listeners on a retrospective journey invoking images of close-knit writing rooms and vintage recording studios, to bustling club nights and Fender-fuelled honky-tonks. These attributes, along with themes of human interaction and the ebb and flow of interpersonal struggles, stand in high contrast with the solitude of writing in isolation, virtual collaborations and the challenges of recording in a world fighting its way through the midst of a pandemic.

Acclaim for Pay, Pack and Carry:
“What you get here is engaging small scale, intimate country-ish powerpop ..”
The Independent

“Like Elvis Costello, Collum is able to frame scenes and tell stories with vivid and compelling effect. 9/10”
Americana UK

“A brand of Americana viewed through an exile‘s perspective.
Uncut

“The kind of lyrical twists that endear so many while playing it straight.”
Q

MARTIN BELMONT is an English legend. Starting in the Pub Rock era with Ducks Delux he then became a stalwart with Graham Parker and the Rumour. A whole life making music with legends: Elvia Costello, Nick Lowe and Johnny Cash.

A bonafide legend of rock’n’roll through the ages, Brinsley Schwarz has seen decades of success across multiple musical outfits. Cutting his teeth with the pub-rock legends Brinsley Schwarz, the band brewed up a storm across London and the music world throughout the early 70s as founding fathers of the infamous pub-rock scene.

Taking his distinctive talents on to pastures new Brinsley has since performed with Ducks Deluxe, been axeman in residence with Graham Parker and the Rumour, plus has found himself the long-time sideman guitarist and sometime record producer to Parker’s solo work, where he has continued to make his mark through the years.

Buoyed by his work with Parker to strike out on his own, Brinsley has since spent the last few years recording solo and under his own moniker. His latest album ‘Tangled’ is out now on Fretsore Records.