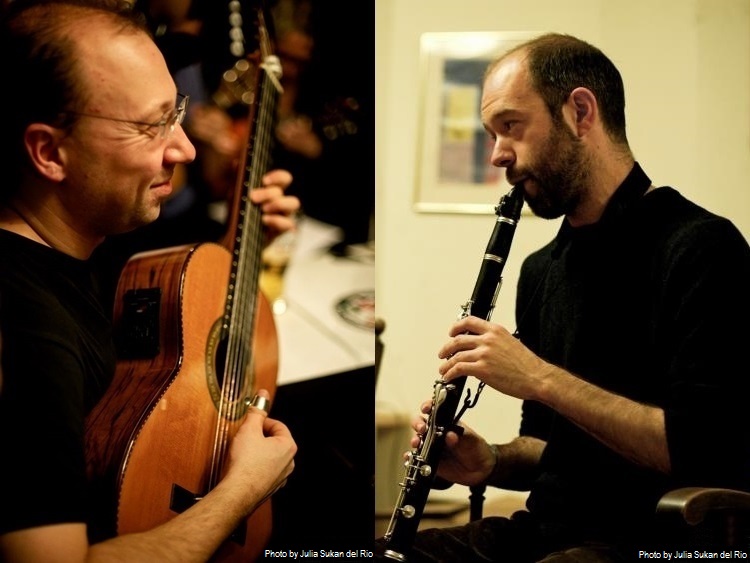 Choro (meaning ‘to cry’) is a rich style of traditional Brazilian instrumental music which developed in Rio de Janeiro in the late 19th century. By turns lyrical, lamenting, playful, infectious and joyous, it is characterised by intricate melodic counterpoint and playful improvisation. Whilst sharing African and European influences (as with Argentine tango or American ragtime), it is a uniquely Brazilian form of folk music, typically performed around the table in bars, kitchens and backyards, and is the precursor to more widely known national styles such as samba and bossa nova.

Choro Matiz – comprising Andrew Woolf (clarinet) and Jonathan Preiss (seven-string acoustic guitar) – play a variety of modern, contemporary and original choros (‘matiz’ means ‘shade’ or ‘hue’). They are two of the foremost exponents of the growing UK choro scene, performing in various choro ensembles including as key members of the popular and award-winning Clube do Choro UK. They were featured on BBC Radio 3’s In Tune to coincide with the opening of the 2016 Olympics in Rio de Janeiro.

Jonathan Preiss is a tremendously versatile guitarist, equally, at home performing Brazilian music, jazz, musical theatre or classical music. He has played with numerous highly respected artists, including Monica Vasconcelos, Henrique Cazes, Rogerio Souza, Direcu Leite, as well as appearing with the London Philharmonic Orchestra and hit Latin/hip-hop musical In The Heights. He has released acclaimed recordings with Caratinga, which he formed in 2000 as one of the first choro groups in the UK.