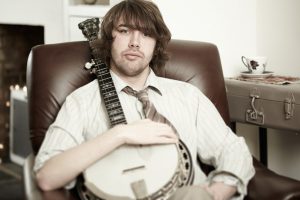 DAN WALSH: Nominated for best musician at this year’s BBC Folk Awards and touted as one of the finest banjo players in the UK as well as being a superb singer, songwriter and guitarist, Dan Walsh is described as ‘the real deal’ (UNCUT). He now has three critically acclaimed solo albums with new album Incidents and Accidents lauded as ‘absolutely terrific’ by Mark Radcliffe on BBC Radio 2. As well as many tours of the UK, he also has recent successful trips to USA, Canada, Germany, India, Norway and New Zealand to his credit. Having made his name with duo Walsh and Pound and now a member of the award winning Urban Folk Quartet, as well as guest appearances with Joss Stone, the Levellers and Seth Lakeman this unique and eclectic musician has stunned audiences across the world.

His eclectic and innovative approach has led to many exciting collaborations alongside his solo work and the UFQ including tours with Northeast concertina legend Alistair Anderson and recent work with sensational Indian sarangi player Suhail Yusuf Khan as well as Canadian country singer Meaghan Blanchard.