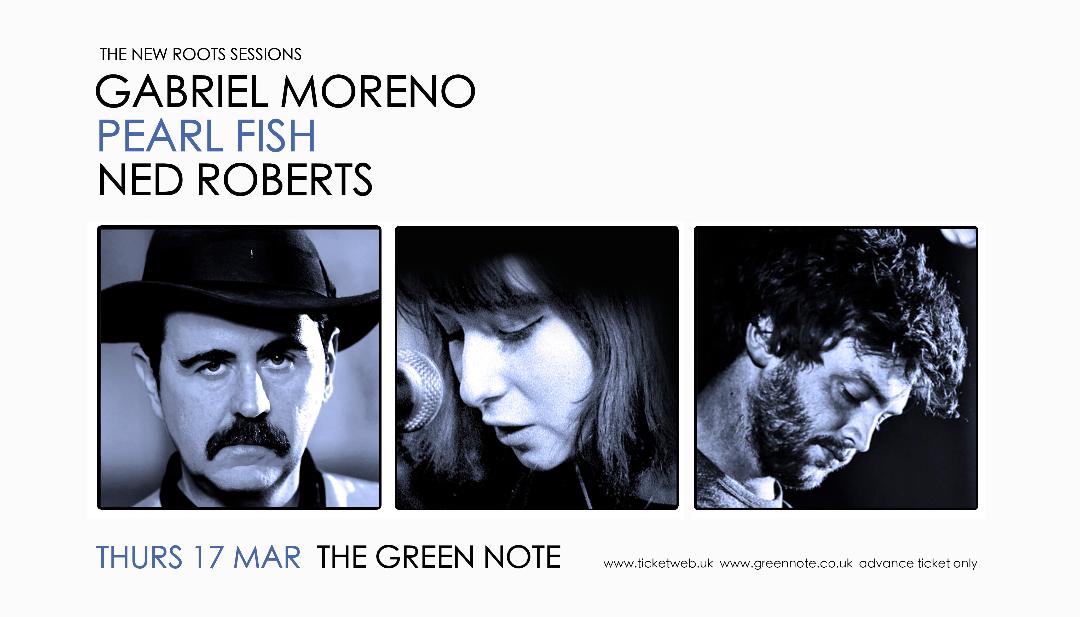 GABRIEL MORENO is a Gibraltarian poet and singer-songwriter who has been performing for the past 20 years in Gibraltar, Peru, Italy, Spain, USA and the United Kingdom. His folk songs are both poetic and political, mining the same rich seams as Leonard Cohen, Fabrizio D’Andre and Georges Brassens. He plays solo this evening- you’ll also find him elsewhere alongside The Quivering Poets, his wonderful backing band with Basia Bartz, Pablo Campos, Pablo Yupton, Adam Beattie and Adria Faurra.

NED ROBERTS‘ releases have featured frequently on BBC 6 Music, BBC Radio 2 and  BBC Radio Scotland, and have been championed by Lauren Laverne, Jo Whiley, Gideon Coe, and Huey Morgan. He’s received significant national press, notably from the Guardian and Uncut magazine, and has recorded live sessions for BBC Radio London and Bob Harris’ Radio 2 show. With extensive shows across Europe and America, live highlights include a tour with celebrated US songwriter Anais Mitchell, plus support slots for Joe Pug, Micah P. Hinson, The Delines and Sarabeth Tucek amongst others. He has released two critically acclaimed albums for the Aveline label (home to Anais Mitchell and Ani Di Franco), with both albums produced by renowned US producer Luther Russell (Noah & The Whale, Sarabeth Tucek).

‘A warm treat…his melodies reminiscent of Leonard Cohen with lyrical nods to Bob Dylan, and his voice has echoes of Tim Hardin‘ ★★★★ The Guardian

‘An English folk sound that evokes the mood and feel of early Laura Marling, brushed with the North American spirit of Lambchop, Phoebe Bridgers and Bon Iver…..an emerging talent with a huge future ahead of her.’ Loire Magazine