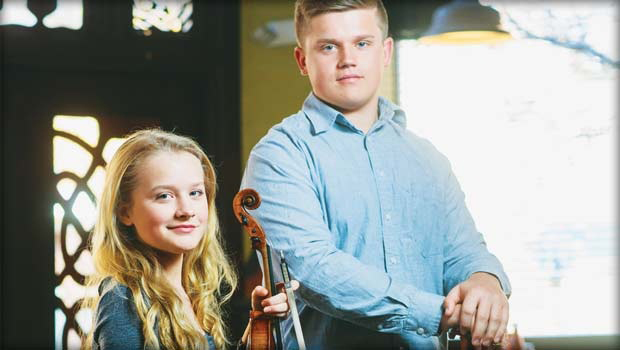 Haley and Dylan Richardson are a sibling duo of traditional Irish musicians who are making their mark in the Irish music world. They have compiled a long list of accomplishments and shared the stage with many of the icons of Irish music; The Chieftains, The John Whelan Band, Pride of New York, Altan, Dervish, and The Teetotallers.

At the age of thirteen, Haley, with her highly ornamented Sligo style perfected under the tutelage of fiddler Brian Conway, is the 2015 Junior Fiddler of Dooney and has already won two All Ireland Championships, brought home a number of All Ireland medals, and won the MidAtlantic Fleadh six times in the under 12 age group and in 2015 in the under 15 age category. She was featured in an article in the Fall 2015 edition of Fiddler Magazine. Dylan’s driving rhythmic guitar backs Haley’s melodies beautifully. His influences include John Doyle and Eamon O’Leary.