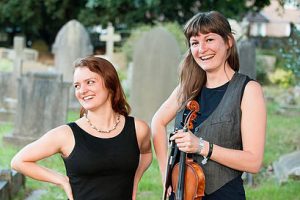 Hannah James has emerged as one of the most imaginative and adventurous artists on the folk scene. First coming to national attention as accordion player and singer with the band Kerfuffle, she was in an acclaimed duo with Bellowhead’s Sam Sweeney, is a member of female vocal harmony trio Lady Maisery, and has worked with folk legend Maddy Prior.

Claudia Schwab is an originally Austrian fiddle player, singer and composer who lives and works in Ireland. Described as ‘one of the most creative artists on the Irish music scene today’ (Dr. Mel Mercier- Irish World Academy Limerick), Claudia amalgamates different traditions and styles, such as traditional Austrian, Irish, Classical Indian and Eastern European folk music, in her own, very unique way.