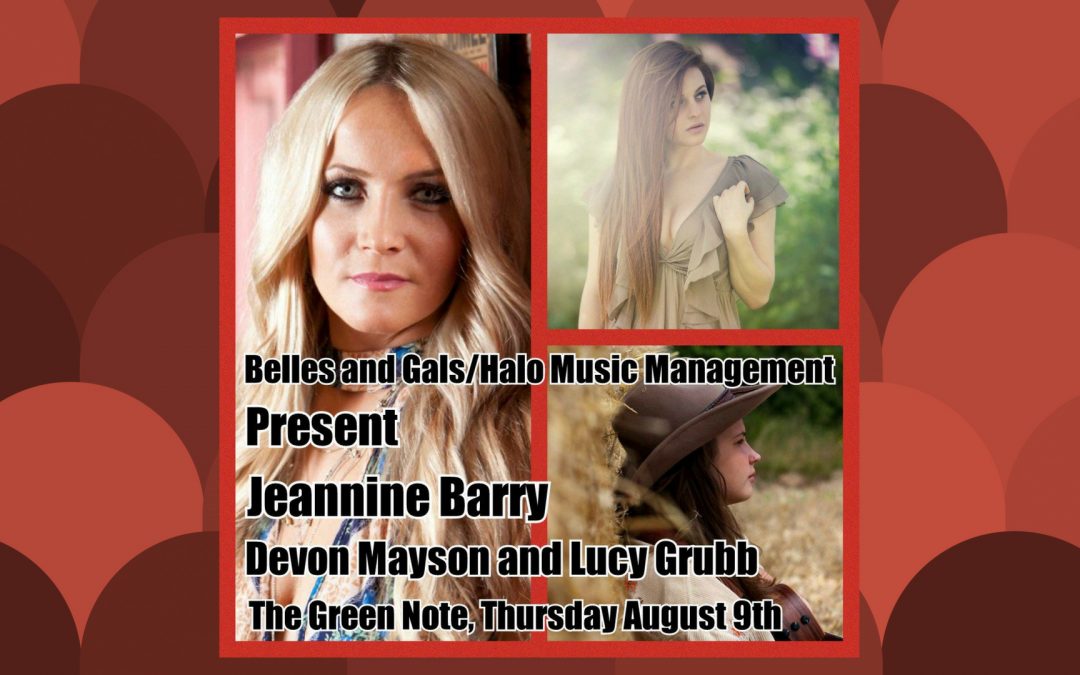 When you’re the only British artist in a Country music line-up featuring Fort Worth’s finest at last year’s Texas Music Takeover Festival 2017 in London, it takes more than just a powerful voice and a No.3 hit in the UK Country iTunes Charts to blow the boots off a sold-out crowd. It takes a sheer volume of authenticity. Something rising star Jeannine Barry carries in spades. Jeannine’s roots may lie in the UK, but the way she effortlessly tunes into the humble, raw and emotional candour of true Country onstage has allowed her to build a loyal fan base worldwide. After hugely successful headline show in London, Jeannine and her band have started 2018 off with a new music release ‘Sweet Spot’ just in time for her 7 sets at this year’s Country 2 Country festival and she also just recorded an ‘Under The Apple Tree’ session for BBC Radio 2’s Bob Harris. This is just the beginning of an exciting and promising year for Jeannine Barry.

”Sweet Spot showcases Barry’s sweet vocals and highlights her talents as a true country vocalist. It’s a really great track and has all the potential to become a huge crossover hit.’’ – Lyric Magazine

“She knows exactly how to portray emotion, embracing the sounds of pop, country and rock. Jeannine mixes it up into a style that is truly her own”.
– Building Our Own Nashville

”Sweet Spot. It’s a fun, upbeat song with plenty of country twang and sassy lyrics, and I was seriously impressed by the power in her voice towards the end as well as her vocal runs. I can see it being a huge hit for her and am already imagining it playing on radio throughout the summer.’’ – Entertainment Focus

“Her voice and talent are not only moving and honest but “Authentically Country”. It has been a while, since my days teaching Beyoncé Knowles actually, that I have been so excited about teaching a young performer.” – David Lee Brewer, Star Vocal Coach

Devon is a singer, songwriter and instrumentalist whose unique style is shaped by influences
from the musical worlds of Country, Folk and Pop; her debut Album ‘Lie to Me’ was released in
the Summer of 2016 to critical acclaim, reached #3 in the UK Country iTunes Chart and resulted
in Devon being named ‘Best UK Newcomer’ at the B&G Country Music Awards. Following the
album, she embarked on a six week tour of the UK and Europe supporting Caitlin Koch,
generating new support wherever she went.
Described by Andrew Marston, BBC Introducing, as “Beautiful songs from an artist who’s been
our BBC Introducing Track of the Week on so many occasions”; Devon’s contemporary style of
country has gone on to become a favourite with BBC Radio 2’s Whispering Bob Harris, resulting
in her recently being invited to record a second ‘Under the Appletree’ session at C2C. “Having
recorded more than 400 sessions over 4 years, to stand out from the crowd is no mean feat – but
Devon certainly did that. With her sensitive songwriting and soaring vocals, she possesses a rare
ability to portray difficult and controversial topics in a way that makes them accessible and
personal to the listener, with a level of musicianship and control that makes her a force to
reckon with.” – Miles Myerscough Harris
Currently in the process of writing her second studio album, the former Miss England finalist
has already been requested for several main stage slots at festivals across the UK. Devon
continues to build her following through regular live performances; her beautiful and soulful
voice, combined with her emotional and raw writing, makes her an artist you do not want to
miss!
“British Country is on the rise, but this piece of British country music comes heavily laced with
raw emotion and integrity rather than sprinkled with the pop fairy dust of more famous
offerings. These eight songs, all written or co-written by the lady herself, all come from the heart
and detail life and love, losses and indiscretions, and find me a person who can’t relate to those.”
– Ian Ambrose, Maverick Magazine.

With heartfelt lyrics and Country undertones, Lucy focuses on telling you the unadulterated truth about a girl who was born and raised in a town not built for Country music.
Inspired by the likes of Johnny Cash, Lucy’s understated guitar rhythms and Country trilled vocal melodies hark back to tried and tested traditional Country song writing, expressing grief, sorrow and heartbreak. Although lacking life experience, Lucy takes her own emotional turmoil and communicates it through gripping lyrical content and storytelling. “One cannot help but wonder where some of those lyrics are coming from, she’s obviously another ‘old soul’ with a huge talent for expressive songwriting.” – Richard Shashamane

With nods to songwriter Paul Simon, Lucy focuses on writing about the truth in a way that sets her apart from other songwriters. Like Simon, Lucy often likes to add a spin to the tone of her lyrics, sometimes witty or sarcastic to enhance the storytelling experience. Ultimately what makes her songs stand out is the ability to take them and create meaning unique to the individual.
In 2014 Lucy made her debut appearance on BBC Introducing in Norfolk, followed by a performance at Open for BBC Radio 1’s Academy in conjunction with BBC Introducing in 2016. Later that year, Lucy supported folk singer/songwriter Lucy Rose at Norwich Arts Centre for Norwich Sound & Vision and formed her band Lucy Grubb & The Lost Boys.

After a great start to 2017 supporting her fellow Country peers Morganway and Sam Coe & the Long Shadows, Lucy went on to play a host of UK festivals including Glastonbury, Red Rooster and Latitude. Accompanied by a sold out show in Norwich, Lucy released her debut EP ’18 Miles’ in November 2017, winning ‘Best UK EP of the Year’ and being named ‘One to Watch’ by Belles and Gals. “Listening to Lucy, you really get the feeling that this is an artist who is doing it her way – it’s country, with a touch of folk, without ever feeling the need to conform 100% to either.” – Nick Cantwell
In April 2018 Lucy won ‘The Bury Songwriter’s Competition 2018′ for her track ’18 Miles’ and released a Music Video.
Lucy has set her sights on breaking into the Country/Americana scene, recording her next record for Summer 2018 and heading to Nashville ‘in the near distant future’.