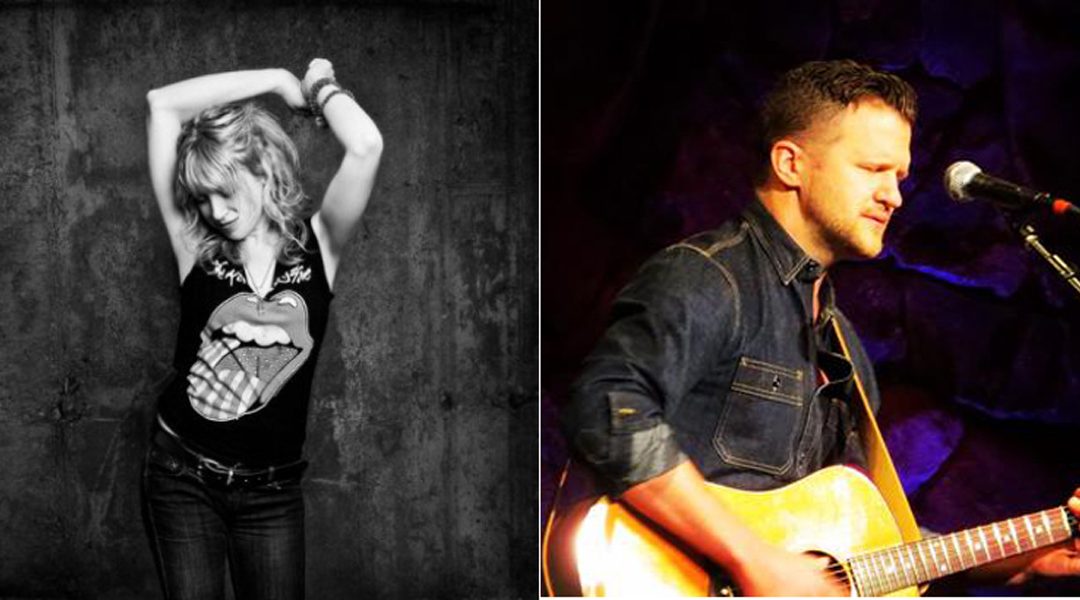 JESS KLEIN: Over a career that spans more than a decade and a half and has won her a devoted worldwide fan base, Jess Klein—who possesses what Mojo magazine calls “one of those voices you want to crawl up close to the speakers to listen to” has pursued a remarkable creative evolution that’s seen her dig ever deeper for resonant emotional insights, while continuing to refine her eloquently melodic, effortlessly accessible songcraft.  Jon Pareles of The New York Times calls her “a songwriter with a voice of unblinking tenacity…who finds parables in the everyday and also finds humanity behind the archetypal.”

Jess is joined for this show by duo parter MIKE JUNE: Mike June makes decidedly timely music, but he does far more than document an era of unease. He has mastered the precarious balance between despair and hope and rendered it melodic across five albums, including Poor Man’s Bible, released on Slothtrop Records in 2016.
“It’s discovering artists like Mike June that makes this all worthwhile; he can certainly write a song; and the theme throughout of the ‘working man of all colours and persuasions is being trampled on’ but his execution of those songs is second to none,” writes the Rocking Magpie music blog of Poor Man’s Bible. They add that June “certainly has his finger on the button in a way Bruce hasn’t had for 20 years or more.”
One year and one brutal election later, June is pushing that button hard. The results are clear in the three-songs that comprise June’s new single, Alright, out July 14 on Slothtrop. The single features the Raleigh, NC band The Backsliders and also guest stars June’s wife, Jess Klein, on backing vocals.
Born in rural New York and raised in New Jersey, June did a stint in Austin (where he made 3 records, including Exile on Wilson Street) before moving to North Carolina. Music has always been a big part of June’s life. “I started pretending to play music at around age 3, miming Kiss songs with the neighbors, and strumming on my Grandfather’s guitar while he sang Hank Williams’ songs. I got into my first bands in high school, and formed my first professional band, Wide Load Joad, in 1999 before going solo and forming Mike June & The Dirty Doves in 2001,” June remembers.
Over the years, June’s focus on the very real stories of very real people has remained intact. “His music is what my generation needs, and what older generations need to remember. He sings love songs about the human experience – sometimes his own,” writes The Austin Chronicle, “I consider him a storyteller of the revolution.”

MICHAEL LOGEN: “The noisier the world gets, the more powerful silence becomes. I headed out to a cabin in the Tennessee mountains. I took a few books. I covered all the clocks. No TV, no internet, no phone, no radio. Songwriting can be a bit like deep-sea diving and in everyday life you have to “surface” now and then. But in the wilderness, you never surface, even if you want to.”
This is Americana/Folk artist Michael Logen, based in Nashville, Tennessee, describing his writing process for his stunning, sophomore album, “New Medicine”. The album has garnered 6 TV placements so far and includes Michael’s original, acoustic version of a song he wrote with Jennifer Hanson, called “Breaking Your Own Heart”, which was covered by Kelly Clarkson on her Platinum-Selling, Grammy-Winning album, “Stronger”.
Michael’s songs have been featured on many TV shows including multiple placements on “Nashville”, “Suits”, “Parenthood”, “The Fosters” and “One Tree Hill”.
Michael has performed in every state in the continental US as well as in the UK, Denmark, The Netherlands, France and Spain, opening for such artists as John Hiatt, John Legend, India.Arie, Jonny Lang and Mat Kearney.
A prolific songwriter, Michael’s songs have been recorded by many other artists including Jonny Lang, Kelly Clarkson, Mat Kearney, Brandon Heath, The Greencards, Paul Carrack, Will Hoge and Sister Hazel.