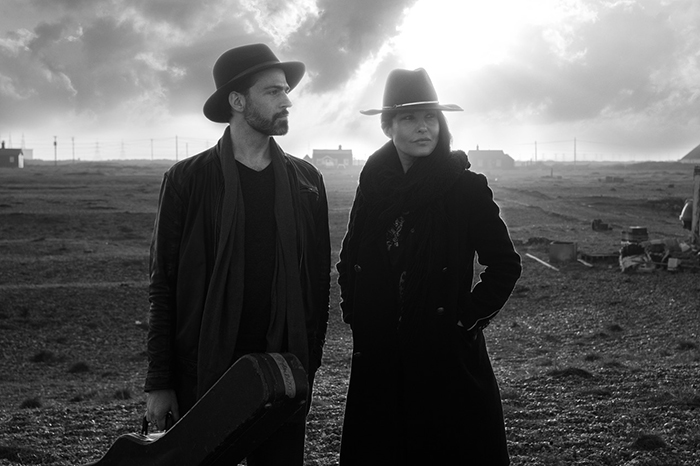 JO HARROP & JAMIE McCREDIE: Effortlessly blurring the lines between jazz and folk, Weathering The Storm is an achingly beautiful and intimate album that is so shot through with pathos and pain, it could melt the hardest of hearts.

Having cut their teeth working with an array of stars including Jools Holland, Melody Gardot and Robbie Williams, Jo Harrop and Jamie McCredie took a leap of faith and started working together on what would eventually become their debut. Mixing up a potent blend of Great American Songbook evergreens alongside a handful of indelible classics by Tom Waits, Randy Newman and David Gates, they somehow manage to shine new light on these old songs about life, love and loss.

“All of these songs communicate the universal aspects of human emotion in the face of change, whether it’s love or loss, happiness or sorrow,” Harrop explains. “The title, Weathering The Storm, suggests fortitude in the face of turbulent times, but it’s also a fond reference to the rugged landscapes of our hometowns in the North East of England. This album is an exploration of emotion and depth and the realisation that sometimes the most profound experiences are also the simplest.”

Harrop’s velvety voice shimmers and weaves its way between the notes of McCredie’s mellifluous, deliciously understated guitar like steam, weighing each and every word with precision, silently contemplating exactly how much she wants to reveal and how much she wants to keep hidden in the shadows of these deep-blue soliloquies. At times, she sounds as if she is living inside the songs, with each lyric a page from her diary.

“We really wanted to capture a spontaneous live feel whilst also making something timeless that moves people in the same way that I’ve been moved by so many albums throughout my life,” she continues. “Two of the biggest touchstones for Weathering The Storm were the duets albums by Bill Evans and Tony Bennett and Joe Pass and Ella Fitzgerald. You can hear such a close emotional connection on those records. When Jamie and I first started working together, we instantly realised there was a similar kind of musical telepathy between us.”

Recorded live in one or two takes, often in late-night post-gig sessions in McCredie’s London studio, Weathering The Storm has an ageless, ineffably moving quality that is pure and true and as rare as hen’s teeth.