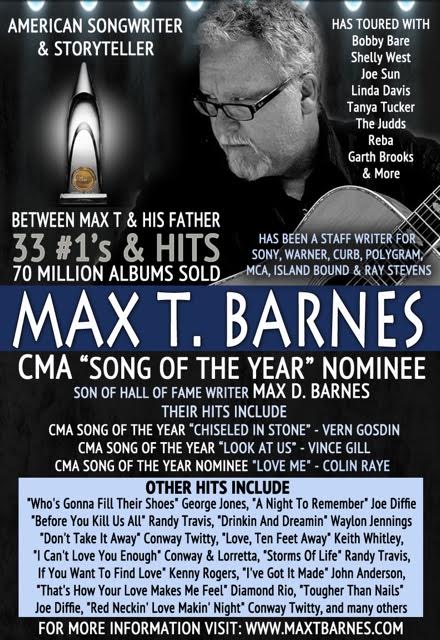 MAX T. BARNES is a hit writer who is the son of a hit writer. He wrote his first hit song at the age of 19, Vern Gosdin’s “Way Down Deep”, and he’s been topping the charts ever since.
Writing “Let Go of the Stone” by John Anderson, “At the Sound of the Tone” by John Schneider, “Before You Kill Us All” by Randy Travis, and 3 Weeks at #1 with “That’s How Your Love Makes Me Feel” by Diamond Rio – and 3 weeks at #1 with “Love, Me” by Colin Raye to name a few.
Later that year, “Love, Me”, the career launching hit For Colin Raye also took Max T. to the CMA awards as a CMA “Song of the Year” Nominee. But Max T. Barnes did not win it that time around. Among other greats, he was up against his dad, legendary songwriter Max D. Barnes. His father took home the award that night with “Look At Us”, a song written by him and Vince Gill. “My poor mom didn’t know who to root for”, Max T. remembers. “I am proud to have been a part of the only father/son competition in CMA history.” His father, Max D., had also won in 1989 with “Chiseled In Stone”.
Between Max T. and his late father they have written 33 #1’s and hits and sold nearly 70 million records.
Max T. is branching out by doing live dates singing his hits and his favourites of his dad’s. “I love singing “Who’s Gonna Fill Their Shoes” ‘cause everybody knows it.” Barnes states. “Chiseled In Stone”, “Joe Knows How To Live”, “This Ain’t My First Rodeo”, these are the meat and potatoes of country music” he says. It’s safe to say that when he plays live, he doesn’t run out of material.
Among his latest hit singles were two Joe Diffie hits, “A Night to Remember”, “Tougher Than Nails” and “Biker Chick” by JoDee Messina.
In the past 2 years Max T. has toured Australia twice, Ireland six times, Belgium, Scotland, England, Sweden, Norway, Canada and the U.S. doing shows and his songwriting seminars. He just signed a new publishing deal with Eleven Eleven Music in Nashville, and scored a cut on Trace Adkins new album called “I’m Gone”.
Max T. released a single in Ireland, a duet with Irish Super Star Jonny Brady, titled “The
Craic” (which means a good time in Celtic) The pair enjoyed great success at radio and received a nomination for “Single Of The Year” at IrishTV.
Max T has just finished producing new album for Bobby Bare due in May 2017. It features all new songs and an appearance by Chris Stapleton on an amped up new version of “Detroit City”.
Support from WILL SHACKLETON + LUCY ZIRINS
London based guitarist/singer-songwriter, WILL SHACKLETON has worked as a sideman guitarist on the session scene for a number of years. He has performed with major label artists on stage, on TV and in the studio, including a live session at the legendary Abbey Road Studios. With soulful guitar playing, thoughtful storytelling and a smooth, laid-back vocal, Will’s original material invokes influences of Jackson Browne, JJ Cale and John Mayer to name a few.
Award winning London based singer-songwriter LUCY ZIRINS hails from the small town of Burnley, Lancashire.
Chosen by PRS for Music as one of their “Class of 2010”, her creativity, hard work and ethos towards songwriting has led her to gig extensively, write, release and tour critically acclaimed album ‘Chasing Clocks’ & EP ‘What’s in Front of Me’. Recently graduating with a First Class Honours degree in Songwriting, R2 Magazine said of Lucy: “Still in her early twenties, if she can continue to write songs of this calibre, Lucy Zirins will become a major player”. She most recently released a live album ‘Live at the Old Courts’, with Roots authority FATEA magazine recommending it, saying Lucy’s ‘singing is wonderfully crystal clear and the guitar playing precise’. Her rise looks set to continue as Lucy’s finishes her latest studio album in 2018.