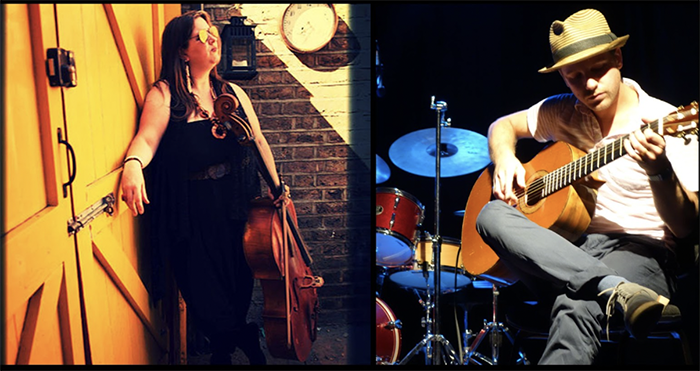 An evening of acoustic music spanning jazz standards, originals and music from around the world. Shirley Smart and Peter Michaels have performed as a duo together for several years, and are tonight joined by their special guest, the wonderful singer Louise Balkwill.

Shirley Smart: Shirley Smart is recognised as one of the UK’s most versatile and creative cellists – being equally at home and well versed in jazz and Middle Eastern music, as well as classical music.
Originally trained under Raphael Wallfisch at the Guildhall School of Music, and Janos Starker in Paris, she subsequently moved to Jerusalem, where she remained for 10 years, studying and performing a wide variety of musical traditions from the North Africa, Turkey and Middle East. She was also highly active on the jazz scene, working with artists including Avishai Cohen, Omer Avital and Yasmin Levy. Since returning to the UK, she has quickly become known as one of the most creative cellists on the music scene and has worked with many leading jazz and world music groups, including Antonio Forcione, Mulato Astatke, Gilad Atzmon, Neil Cowley, Julian Ferraretto, Robert Mitchell, and Alice Zawadski.
Shirley is Head of Performance and a Lecturer in Music at City University, and also teaches Improvisation and Jazz at the Royal College of Music Junior Department. She is a visiting tutor for the National Youth Jazz Collective, and an in demand workshop leader. She leads her own trio and sextet projects and performs in many other bands.

“One of the best improvising cellists in the UK” The JazzMann

Peter Michaels: Peter Michaels is a multi-instrumentalist and composer for film, theatre and the concert platform. From classical and jazz roots, he has expanded his style across genres to become one of the most versatile composers in media today.                Performing with musicians from around the world, he incorporates elements from Brazil, Eastern Europe, India, the Middle East and Africa into his compositions. His many live projects include Pocket Caravan, Captain Ska, the Hunter Gatherers and Melange.