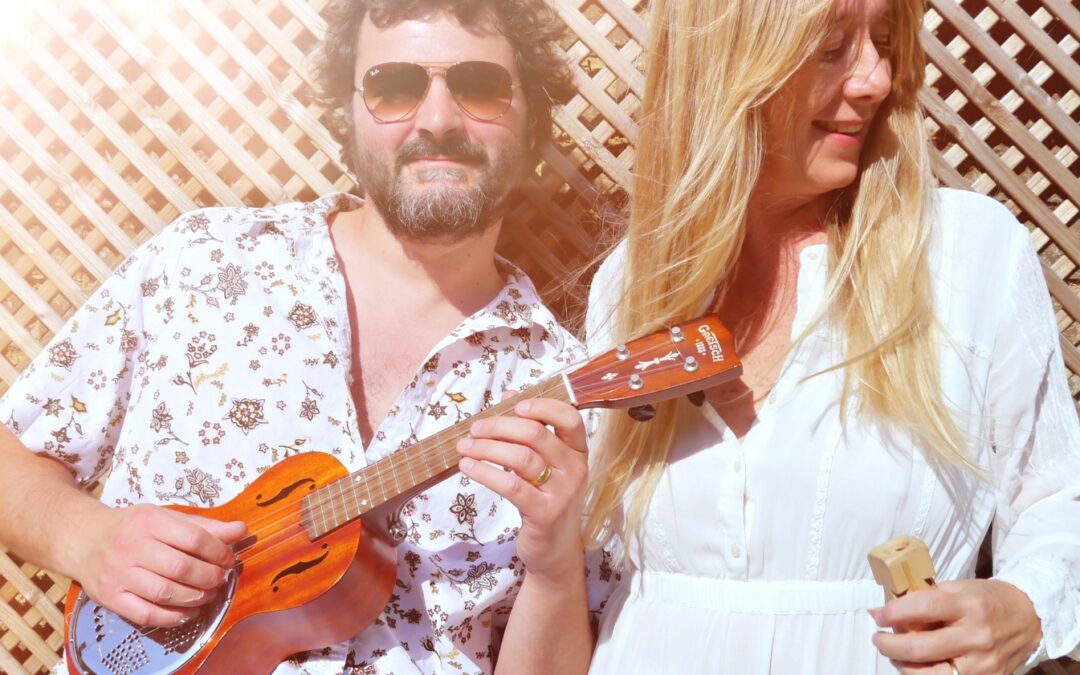 OKA VANGA: Oka Vanga are Angela Meyer & William Cox, an award winning Folk / Americana duo.
Originally from Cape Town in South Africa, Angela Meyer is the creative driving force in the partnership and has been described as having “considerable vocal and songwriting talents” by fRoots. Showing an early aptitude for music, she was picking out her own tunes on piano by the age of four and a keen guitarist by the age of six. Well-travelled and free-wheeling, it was years before she finally found an anchor in husband and multi-instrumentalist William Cox after their chance meeting at an open mic night in London.

Hailing from the city, William Cox was already an established musician and had started his own teaching music studio. Their musical synergy was instant, and as a highly skilled guitar duo their performances  quickly caught the attention of the guitar community. Performing at acoustic clubs and festivals Oka Vanga was born, and a short E.P of original guitar instrumentals became their calling card. In 2013 they were invited to represent the UK at the International Madame Guitar Festival in Italy alongside guitar luminaries such as Ralph Towner (USA) and Clive Carroll (UK), and shortly thereafter they released their debut album Pilgrim to critical acclaim. Described by Songlines as “beautifully pure”, it was awarded Best Instrumental Album by FATEA magazine in 2014.

A short EP Tales of Eyam followed in 2015 to great reviews and critical acclaim. Described as “a beautiful E.P with great musicianship and really fine songs” by Mike Harding, it showcased Angela Meyer’s hidden singing voice for the first time. Described as “gem bright” by RnR, it also brought Will’s considerable talents as a talented multi- instrumentalist to the fore. Despite only being an E.P it was nominated for “Best Album by a Duo” by FolkWords and captured the imagination of the Folk community.

Their much anticipated second album Dance of the Copper Trail  was released in 2017 and is described by Songlines as  “profound, concise and meticulous” with Angela’s lyrics “ displaying a talent for conveying emotion and joy.” Songs of faith and superstition, love and loss, death and everlasting hope are all seamlessly woven together and showcase all the manner of musical influences. Described by fRoots as “distinctly classy” and an album of “serious accomplishment and musicality”, it has secured Angie and Will a place in the hearts and minds of many fans with what RnR describe as its “up-beat feel”  and “Celtic-deep universality”.

Their self-titled third album Oka Vanga was released in March 2021.  Blending a rich palette of strings, frets, and percussion with a foot stomping groove it is a bold vivid set of songs and instrumental tunes ….