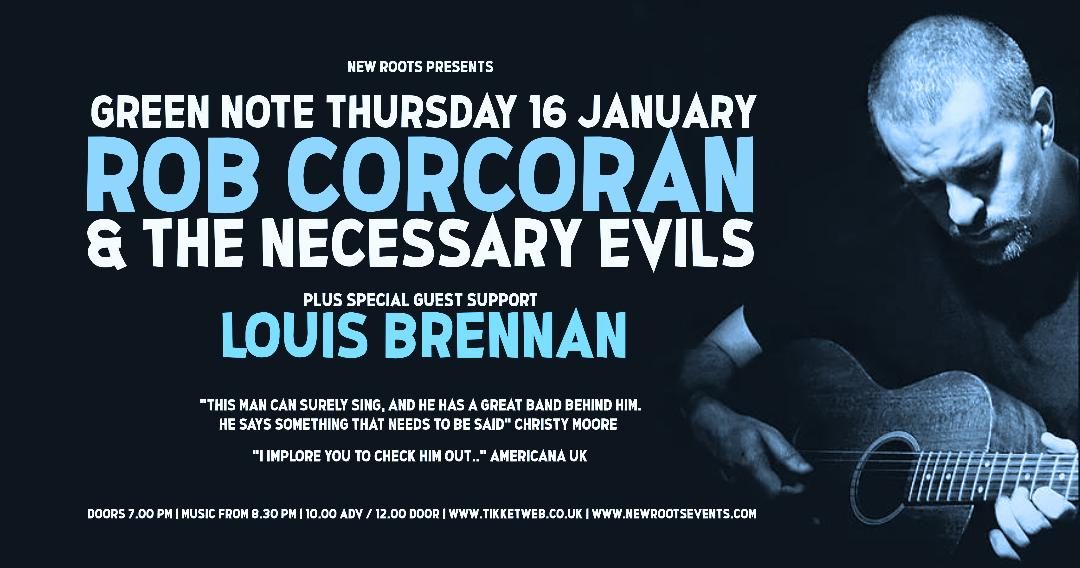 Dublin troubadour Rob Corcoran is a much respected figure on the London roots scene, with folk legend Christy Moore including his version of Corcoran’s brilliant ‘Ringing That Bell’ as a key song in his current touring set.  Backed by a firing five-piece band, Rob’s lyrically compelling, beautifully observed songs are drenched in Celtic soul, drawing from the same deep wells that serve Van Morrison and Mike Scott so well. Present too is a strong thread of influence from the heart-on-sleeve poetry of John Prine, Hank Williams and Leaonard Cohen. He recently supported legendary Irish roots artist Mary Coughlan in the UK, and continues to hone his craft both solo and with full band around the best folk venues of Britain and Ireland.
“This man can surely sing, and he has a great band behind him. He says some things that need to be said” Christy Moore
“I implore you check him out, don’t let me down… this guy is special.” Americana UK 9/10

London based Dubliner Louis Brennan is a singer-songwriter in the folk tradition. His folk however aren’t the field hands and travelling minstrels of yore but the repressed middle managers and ennui-ridden urbanites of late stage capitalism. They populate tales of bad sex, half-drunk commutes and interpersonal claustrophobia delivered in Brennan’s cracked baritone, at times intensely intimate, at times broad, peppered with pitch-black humour.
“A master storyteller with a voice like rolling thunder” GQ