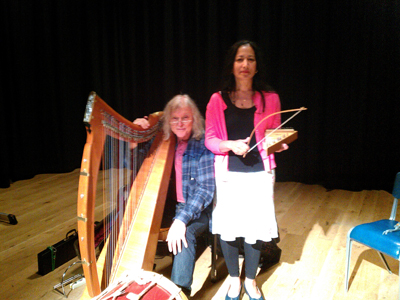 ROBIN WILLIAMSON: Founder in the 1960’s of the Incredible String Band and of the Merry Band in the 70’s Robin Williamson has been at the forefront of the storytelling revival in Britain and America since the 1980’s. He continues to tour internationally solo and as a duo with his wife, singer and multi-instrumentalist, Bina Williamson.

A most prolific and diverse songwriter, Robin has made numerous records over his 50 year career, most recently for ECM and Quadrant as well as on his own label Pigs Whisker Music. Twice nominated for a Grammy he is cited as an influence by Paul McCartney, Led Zeppelin and many contemporary acoustic and new folk artists. His new record, Trusting in the Rising Light, is out now on ECM and has been getting many 5* reviews.

BINA WILLIAMSON is an inspired and gifted singer, songwriter and multi-instrumentalist in her own right. She has a hauntingly sweet, melodious voice and plays bowed psaltery, autoharp and dulcimer.
“Enthralling!” Glasgow Herald, Celtic Connections 2013

Robin and Bina work together so well because they create a perfect balance of voices drawing on an exotic mix of Celtic Indian and Old Timey roots. Their soulful performances feature their East West harmonies,with harp bowed psaltery and diverse other instruments.
“Pure beauty through simplicity” Robert Plant