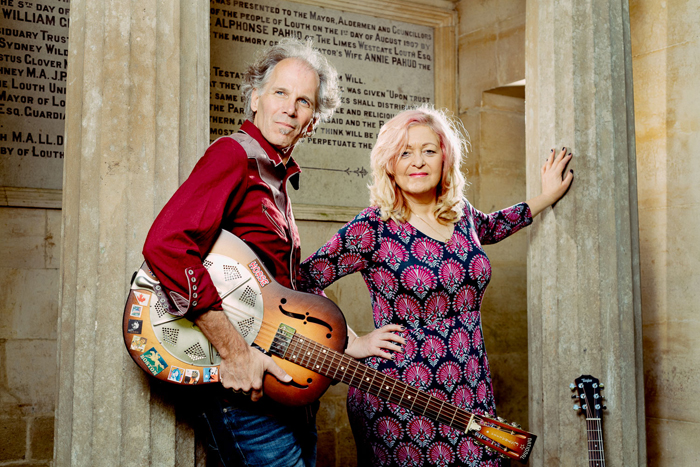 SALLY BARKER & BROOKS WILLIAMS
It’s obvious when there is a spark between two musicians and this collaboration between two classy and versatile singer songwriters is something special. They met when Brooks was making his latest album ‘My Turn Now’ on which Sally did some guest vocals, there was an instant connection. They have both had a long and varied career which reflects in their repertoire and easy nature of their song writing and music making.

Known most recently for her appearance on ‘The Voice’, on which the Leicester lass managed to reduce Tom Jones to tears, Sally has also supported Bob Dylan, Robert Plant, sings with the reformed Sandy Denny’s Fotheringay and, for many years, led all female folk band The Poozies.

Sally’s songwriting influences of folk, jazz, blues and soul and ability to get inside the words on the page and sing them as if you were hearing them for the first time are evidenced on her new album ‘Ghost Girl’, which will be out in early 2017 to coincide with her support slot for Fairport Convention’s 50th Anniversary tour.

Brooks hails from Statesboro, Georgia, the town made famous by country-blues legend Blind Willie McTell. Ranked in the ‘Top 100 Acoustic Guitarists’, his music is a fusion of blues, old country and a touch of Americana. Audiences are often heard asking, how can one guitar and one voice sound like a full band.

Brooks has performed on stages worldwide for over twenty-five years and has amassed a staggering back-catalogue of songs and recordings. In addition to his solo work, he is also half of ‘State Of The Union’ with singer-songwriter Boo Hewerdine, and fronts Lightning Express, with Andy Seward and Keith Angel.
Quotes about Sally:

“I have to say you sound amazing and angelic” – (Will.i.am)

“That was beautiful. Sally makes the room stop.” – (Kylie Minogue)

“her enormous vocal range and stupendous control can relax or rouse at will – she coaxes her voice from that of a mild modern English rose to raw throated blues.” – (Edinburgh Fringe Festival review)

“Fans of the music of Ry Cooder and JJ Cale will definitely cherish this album [My Turn Now].” – (Keys And Chords)

“He’s a lovely player, a lovely singer, and a great writer. The real thing.” – (Martin Simpson)

“How soulful a solo guitarist can be when he has talent, taste and astonishing technique.” – (Blues Revue)