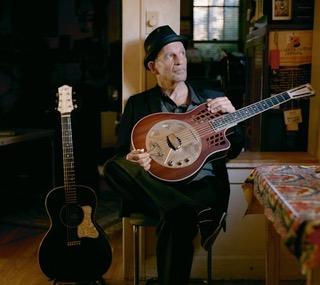 STEVE JAMES… Described as “an underground legend”, this veteran of the British folk and blues scene makes his second appearance at Green Note!  His singing style and touted skills on guitar, slide guitar and mandolin are directly influenced by early mentors like Furry Lewis and Howard Armstrong.  Rather than reciting lessons from these masters, however, he has followed their directive to “get your own song”; and his set is livened by creative songwriting and musical arrangements.  Decades of world travel at street level have also made a storyteller of this post-modern songster.  “He has a rare gift for using traditional forms with complete naturalness.” says author/musician Elijah Wald.  Roots guitar shaman Jorma Kaukonen states simply: “He’s one of the best I know.”