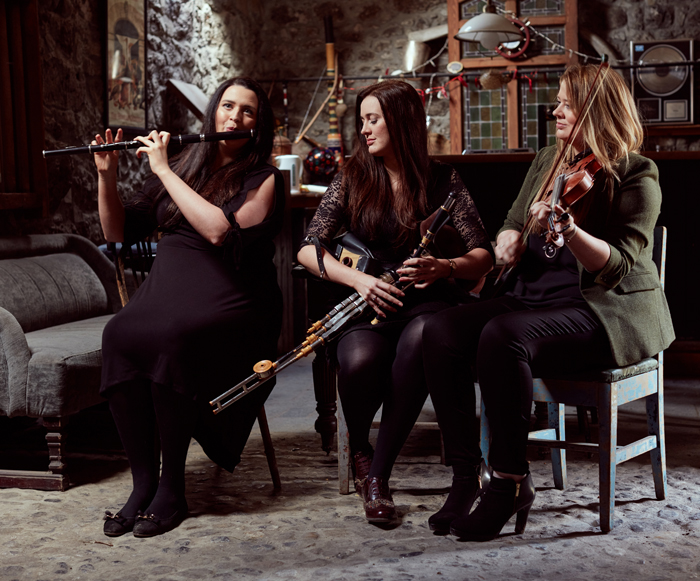 The Friel Sisters, Anna, Sheila and Clare Friel are young traditional musicians born and brought up in Glasgow with their family roots firmly entrenched in the Donegal Gaeltacht. They play a mixture of music interspersed with songs in English and Irish, many from their family repertoire. Being siblings, they achieve a close blend on fiddle, flute and uilleann pipes.

Since the launch of their debut album, they have performed in various venues and festivals across Europe, America and Asia and have appeared as guests on stage or toured with acts such as Altan, The Chieftains, Lúnasa, Sharon Shannon, The Máirtín O’Connor Trio, Cherish the Ladies and Solas. In 2016, the girls performed at Festival Interceltique de Lorient, and won the prestigious Trophée Loïc Raison for best band of the festival.

2017 was a very exciting time for the girls as they recorded and prepared for release of their new album ‘Before the Sun’ with Hajime Takahashi and Cathal Ó Curráin, produced by Ciarán Ó Maonaigh and recorded by Jack Talty. This was launched at Scoil Gheimhridh Ghaoth Dobhair, in Donegal in December 2017 and at their sold out Celtic Connections gig in January 2018. Since it’s release, ‘Before the Sun’ has been very well received, getting 4 stars in the Irish Times and a lot of airplay including being played on RTE 1’s ‘The Rolling Wave’ as part of International Women’s Day.

In February 2018, Clare received TG4 Gradam Ceoil Ceoiltóir Óg/Young Musician of the Year 2018. The awards concert was held in the Waterfront in Belfast, where she played solo and with Anna, Sheila and Cathal Ó Curráin to an amazing audience, including the Irish President Michael D. Higgins. She was completely honoured to receive this, and to be amongst an incredible list of winners for this year. She is the first person in Scotland to receive this award.

“The Friel Sisters’ music cannot be held back; it is what comes natural to them. They breathe music, they live music, they love music. Traditional Irish music is in a richer place for having these young genuine people carry it on to future generations.”
Mairéad Ní Mhaonaigh of Altan

“The Friel Sisters represent a new strand in traditional Irish music – they superbly balance a contemporary approach with an informed understanding of where their song and music comes from. They encompass the soul of Irish music. Daughters of the diaspora, they are extremely capable, professional in the approach to their work and, above all, entertaining onstage.” Tom Sherlock, Irish music agent, promoter and manager

“Powerfully performed…energy and finesse” Songlines, May 2018

“Allow this mix of tunes and songs to soak into your soul and carry you away…that’s a pleasure that should be enjoyed to the full. Immerse yourself in Before the Sun from The Friel Sisters and you’ll discover something so close to perfect you would be hard pressed to make it any better” FolkWords, December 2017

“This is a joyous listen for me, the wonderfully delicate, strong, always controlled talents of Anna, Sheila and Clare Friel enhance a wondrous tradition.” Tommy Peoples, November 2017

“It’s been a thrill to watch them develop as singers and musicians and to marvel at their talent and enthusiasm for our shared heritage. We’ve been making music together all our lives and can feel their intuitive sympathy and understanding for each other’s music.” Maighread and Tríona Ní Dhomhnaill, November 2017