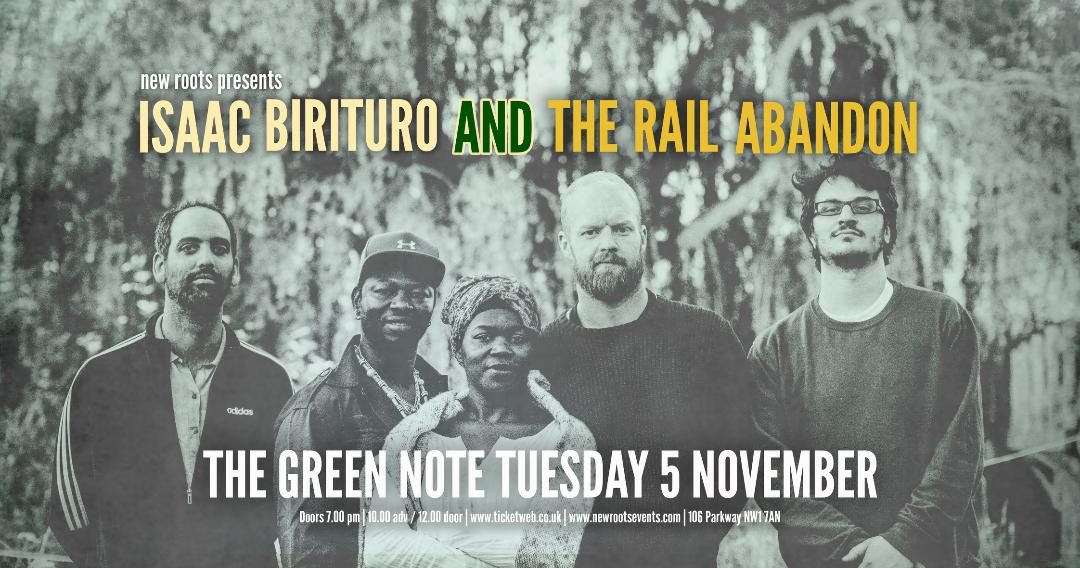 New Roots presents… THE RAIL ABANDON and ISAAC BIRITURO, featuring Sonny Johns (bass) Isaac Birituro (xylophone) Raph Clarkson (trombone) Yolanda Eyama (vocals) Yuval Wetzler (drums)  Moussa Dembele (balaphone).
“This is fantastic”
John Kennedy, Radio X
“Beautiful”
Shaun Keaveny, BBC 6 Music
“A whole story in three minutes and a half”
Cerys Matthews, BBC 6 Music
The Rail Abandon is the musical (dis)guise of Sonny Johns, Grammy, MOBO and Mercury nominated producer, engineer, musician. Grounded in the 1960s folk revival of John Martyn, Nick Drake and Fairport Convention, The Rail Abandon’s “Afrolktronica” incorporates influences of electronic music as well as the sound of West Africa – inspired by the musicians Sonny has worked with, including Ali Farke Toure, Fatoumata Diawara, Orchestra Baobab and Tony Allen.
In 2016 Sonny went to Ghana and met master xylophone player Isaac Birituro. After an instant music connection, they spent 3 days in a church making the basis of the album Kalba. Sonny then called upon musician friends, such as Polar Bear’s Seb Rochford, Leafcutter John and Mark Lockheart as well as Laura Jurd, Elliot Galvin and Samantha Whates, to produce “one of the most exciting things I’ve worked on in the 20 years of the label,” – Dom Servini, Wah Wah 45s.
The album is a collaboration between Ghanaian and UK songwriters, recorded by 28 musicians from around the world, a mixture of traditional Ghanaian xylophone music, British folk, Afrobeat, Highlife, electronica and a whole lot more.
Incorporating new members on trombone/synth (Raph Clarkson), drums (Yuval Wetzler), vocalist Yolanda Eyama and master balaphone player Moussa Dembele, The Rail Abandon will be touring the music from Kalba as a six-piece recreating the sound of 28 musicians on the album.