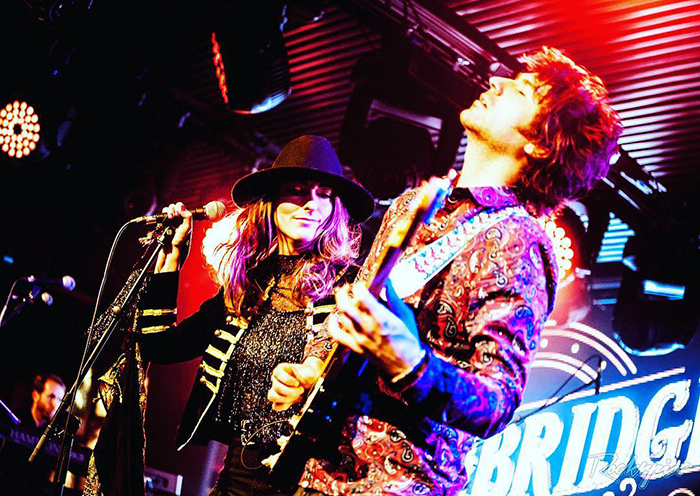 WOLF MOON: Wolf Moon is the duo that grew out of Lethbridge Owen. Founded by Singer/Songwriter and virtuoso guitarist Jimmy Owen and gifted vocalist Kelly Lethbridge, the duo have since attracted some of the UK’s most respected performers into its ranks, including the inimitable Erik Stams on drums, Noah Nelson on bass, Emily Francis on keys and various other incredible musicians as its powerhouse rhythm section. The centrality of all the band members in the creative process and in shaping the group’s distinctive sound meant a new name was needed, and in January 2020 Lethbridge Owen was reincarnated under the Wolf Moon!

“Wolf Moon’s new music crosses genre boundaries with panache and class; echoes of Fleetwood Mac with a modern, vibrant application and fully from the heart. Thoughtful, fresh and engaging, this is music that everyone should give a chance.” Great Music Stories – Guy Bellamy

“Wolf Moon’s debut album is an intoxicating mix of rock and roots, with acoustic flavours underpinned by excellent songwriting and truly fine musicianship. Highly recommended by all of us here!” Mark Ede, BiG I AM Management

Support from DEAD JACKALS: Formed in late 2019 by TommyK (Vocals/Bass) Dead Jackals are a passion project pulling influence from bands such as Thin Lizzy, Blink 182, a combination that on paper sounds like the weirdest crossover ever, but once heard shows that Rock is very much alive and well. TommyK, had been at college with Jolly (Drums) and knew that his drumming would be perfect. Sugarman Sam (Guitar) from Sugarman Sam and The Voodoo Men, a fantastic blues guitarist from Basingstoke, England was next to get the call. Matthew Hudson (Guitar) was the final piece of the puzzle, with his lightning-fast solos and phenomenal licks the band was complete. Dead Jackals were ready, 2020 was slow work due to the pandemic, but songs were written, recorded and ready to go. Dead Jackals released their debut single ‘I Don’t Wanna Go’ on the 29.10.21 to great reception, the debut E.P released on the 26.11.21. 2022 holds much more for the four piece from Hampshire, England. With catchy vocals, epic riffs, powerful bass and hard-hitting drums, Dead Jackals are here to show the world that Rock, is very much alive. Tonight performing an exclusive debut acoustic set.