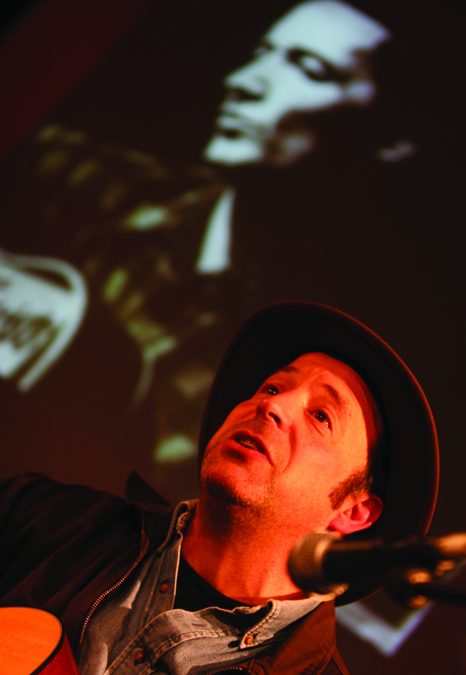 WOODY GUTHRIE AND “OLD MAN TRUMP” – Will’s newest show – tells the story of Guthrie’s battles against his racist Brooklyn landlord, Fred C. Trump, father of the US president. Based on unpublished songs, letters, and notebooks that Will discovered in the Woody Guthrie Archives, the show brings to life all the anger and contempt that Guthrie felt for those in power who will deny justice to their fellow human beings on account of the color of their skin.

“No one can understand the American people without listening to Woody Guthrie. Will Kaufman’s doing important work here.” Tom Paxton

“Woody wrote literally thousands of songs, and they’re known all over ‘the other America’. I thank Will Kaufman for introducing a new generation of Europeans to this side of the country. It’s a wonderful job he’s doing.” Pete Seeger

“Will presents this exhilarating show in the fastest hour and a half you are likely to witness when you consider the breadth and depth of his subject. He performs Woody’s songs with great skill and understanding, playing the guitar, banjo and fiddle with enviable panache and brio. His presentation is accomplished with great musicality, wit, honesty, and compassion. I was deeply moved by the whole show and grateful to Will for reminding me once again of the debt I owe to Woody and the admiration I have for his music. You have done Woody proud, Will! I urge everyone to see the show and find out more about the man who inspired so many.” Ralph McTell

“I so appreciate all of your efforts to take his legacy further. Who knows where he’ll end up!” Nora Guthrie

“Listen up all you Jim Crow fascists and you race-hate mongers, too:
Will Kaufman is a-comin’ and he’s got his eye on you.
Won’t brake for no excuses, won’t stand no messin’ around,
Your bigot ways can’t save you ’cause Will Kaufman’s gonna run you down.”
Ry Cooder

WILL KAUFMAN is a singer, multi-instrumentalist and Professor of American Literature and Culture at the University of Central Lancashire in Preston, England. He has given his Woody Guthrie presentations at such major events as the Glastonbury Festival, the Bath International Music Festival, the Whitby Folk Festival, the Big Session, and the Piacenza Literature and Blues Festival in Italy. He has also performed at countless European and American universities, trades clubs, folk clubs and union halls.

Will has written a number of books on American culture – American Culture in the 1970s (Edinburgh, 2009), The Civil War in American Culture (Edinburgh, 2006) and The Comedian as Confidence Man (Wayne State, 1997). In 2008 Will was awarded his first Woody Guthrie Research Fellowship from the Broadcast Music Industry Foundation, which enabled him to write the first political biography of Guthrie, Woody Guthrie, American Radical (Illinois, 2011); he won his second BMI-Woody Guthrie Fellowship in 2014, which led to his second book on Guthrie, Woody Guthrie’s Modern World Blues (Oklahoma, 2017). A third book, Mapping Woody Guthrie, will be published in 2019 by the University of Oklahoma Press. Will was consultant to Johnny Depp and Douglas Brinkley for the publication of their co-edited edition of Guthrie’s recently discovered novel, House of Earth (2013), and it was Will who unearthed Guthrie’s writings condemning the racist practices of his New York landlord, Fred Trump.