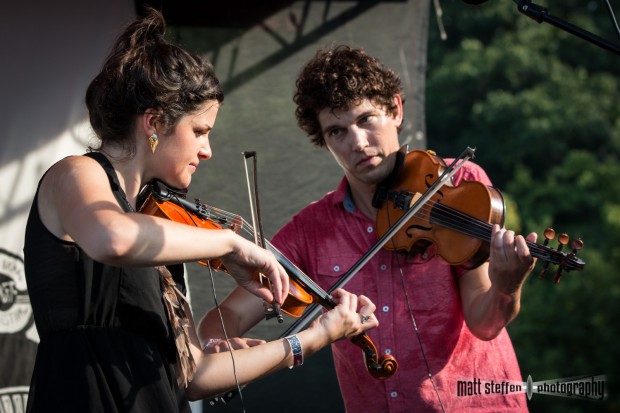 When 10 String Symphony released their superb Weight of The World album in 2015, it created reverberations on both sides of the Atlantic, and was so well received in America that it ended up at the No 3 position on the hugely-influential Billboard Chart.

Nashville-based 5-string fiddle players Rachel Baiman and Christian Sedelmyer first teamed up to create the super-duo out of mutual admiration, released their debut album in 2012 and went on to impress at major events around the USA and as far afield as New Zealand.

When they recorded the follow-up it was a departure from their individual histories – Rachel is a former Illinois state fiddle champion and a 2015 Independent Music Award-nominated artist; Christian had been firmly established as a touring member of The Jerry Douglas Band and a heavily in-demand sideman who has appeared with Emmylou Harris, Buddy Miller, Steve Earle, Vince Gill and Alison Brown.

The current album picked up a top-rating 5-star review from R2 magazine. This is what some others had to say:

“Something out of the ordinary” – fRoots magazine