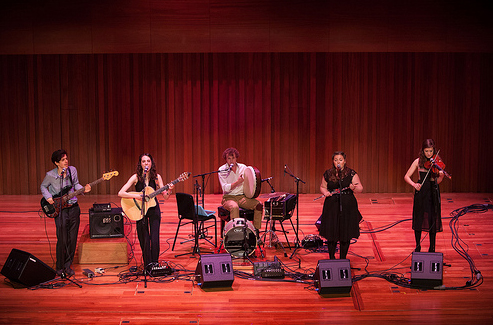 58° North is the latitudinal line that links the home places of the three musicians that make up this exciting new folk act; Ewan MacDonald, Alastair Caplin, and Lewis Murray, with a combination of fiddles and mandolin. Between the three of them they have played on some of the UK’s most prestigious stages, including The Royal Albert Hall, Westminster Abbey, The Barbican and The Roundhouse, and played with some of the UK’s finest folk musicians- Alasdair Roberts, The Incredible String Band, Emily Portman, Abigail Washburn, and The Ceilidh Liberation Front..

Highlights in recent performances have been Bestival, Cecil Sharp House, Royal Albert Hall, Sage Gateshead, Kings Place, City of London Festival, Milton Court Concert Hall, Ronnie Scotts, and the BBC Proms (broadcast on BBC Radio 3). The group were selected for the inaugural City Music Foundation Award in 2013, and as a result were able to record their debut album Stories Sung, Truths Told, which was released in early 2015.

Projects for 2015 included a concert at Shakespeare’s Globe for a series curated by guitarist John Williams, and a residency at Aldeburgh Music alongside artist Jo Lewis.