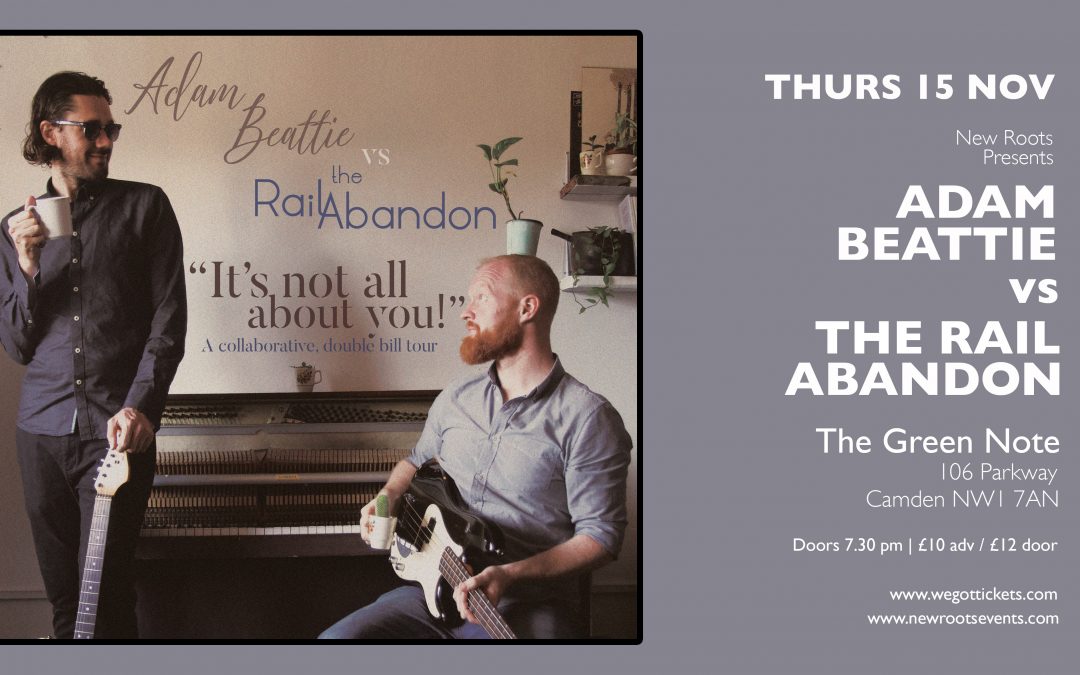 Combining forces to showcase their solo music projects,The ‘It’s Not Always About You!’ tour is a unique double bill concert from singer-songwriters and multi- instrumentalists Adam Beattie and Sonny Johns’ The Rail Abandon. Beattie and Johns are also members of Rough Trade Records most recent signing PicaPica.

Scottish singer-songwriter Adam Beattie has released four albums of his own songs. Having roots in Scottish folk music, as well as a lifelong interest in old time jazz, blues and other folk styles, his genre-spanning music is tied together by his warmly soulful, distinctive voice and poetically narrative lyrics. A consumate performer, Beattie’s shows are as captivating with voice and guitar as they are in full band incarnation. He has performed to audiences across the UK and Europe alongside musicians such as the legendary Bert Jansch, Jolie Holland and Sean Hayes as well as collaborating on guitar and bass with Brooke Sharkey, Scott Hirsch and Michael Chapman. In addition, Beattie is part of 12-piece folk supergroup Band of Burns, contributing interpretations of Robert Burns songs as well as original compositions. In 2018 Band of Burns headlined London’s Union Chapel and played Celtic Connections in Glasgow on Burns Night at The Old Fruitmarket as part of their UK tour. Adam is currently working on a new album of original songs.

The Rail Abandon is the musical (dis)guise of Sonny Johns, Grammy, MOBO and Mercury nominated producer/ engineer/ musician. Grounded in the 1960s folk revival of John Martyn, Nick Drake and Fairport Convention, The Rail Abandon’s “Afrolktronica” incorporates influences of electronic music as well as the sound of West Africa – inspired by the musicians Sonny has worked with, including Ali Farke Toure, Fatoumata Diawara, Orchestra Baobab and Tony Allen. Created as an outlet for Sonny’s solo song writing, The Rail Abandon is
a collaboration of friends and fellow musicians such as Seb Rochford,
Dinosaur’s Laura Jurd & Elliot Galvin, The Little Unsaid’s John Elliot, Liran Donin and Adam Beattie. The Rail Abandon has recorded two albums, the most recent of which, Kalba, is a collaboration between Sonny and Ghanaian xylophonist Isaac Birituro. Named after the town it was recorded in, and where Isaac went to school, the profits of the album will be used to help build a new school in Kalba, North Ghana. The album is due for release in Spring 2019.