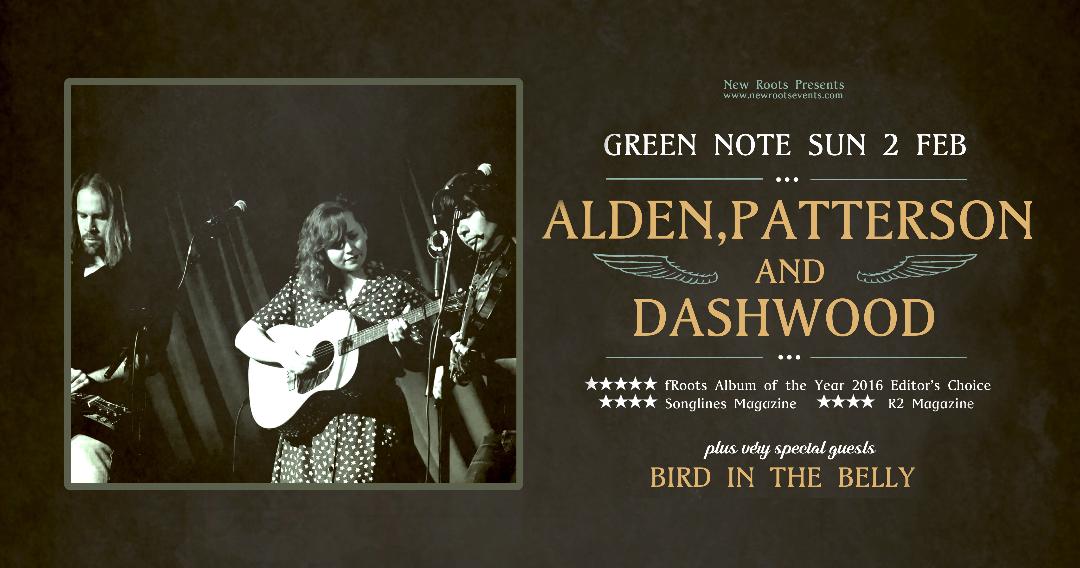 New Roots presents… fRoots Album Of The Year Editors Choice 2016 winners and Folk By The Oak stars ALDEN, PATTERSON & DASHWOOD with support from UK folk quartet BIRD IN THE BELLY..
Taking inspiration from the twin pillars of American bluegrass and English folk, ALDEN, PATTERSON & DASHWOOD weave rich harmonies with fiddle, dobro and mandolin around a combination of finely crafted original compositions and traditional songs, all the while maintaining a thoroughly contemporary cutting edge. Their debut album, Call Me Home, was fRoots 2016 Album of the Year Editor’s Choice. In 2018 they made their debut performance at the prestigious Folk by the Oak Festival, followed by a nationwide UK tour with folk legends Show of Hands. No museum pieces, A P & D feel equally at home alongside the likes of First Aid Kit and Old Crow Medicine Show as they do the stalwarts of US & UK trad folk.
“It’s lovely stuff” – Mark Radcliffe, BBC Radio 2 Folk Show
★★★★★ Album Of The Year Editors Choice – fROOTS Magazine
★★★★★ R2
★★★★ Songlines

“When we saw this Folk / Americana trio live we were completely captivated, and knew we had to bring them to Folk by the Oak and share them with our audience” Adam Slough – Folk By The Oak Festival Director

Brighton based quartet BIRD IN THE BELLY collect little known and forgotten lyrics, poems and stories from around the UK, and set them to their own “hypnotically original compositions” (fRoots). Their sound is raw and bare-boned with “distinctively contemporary and earthy vocalising” (R2 Magazine), linking them stylistically to contemporaries Stick In The Wheel and Lankum. Their debut album ‘The Crowing’ (March 2018, GF*M Records) was met with critical acclaim across the board from fRoots, R2, Songlines, Louder Than War, Northern Sky, Folk Radio UK, as well as the Sunday Express giving the album 5/5 and calling it folk album of the year.