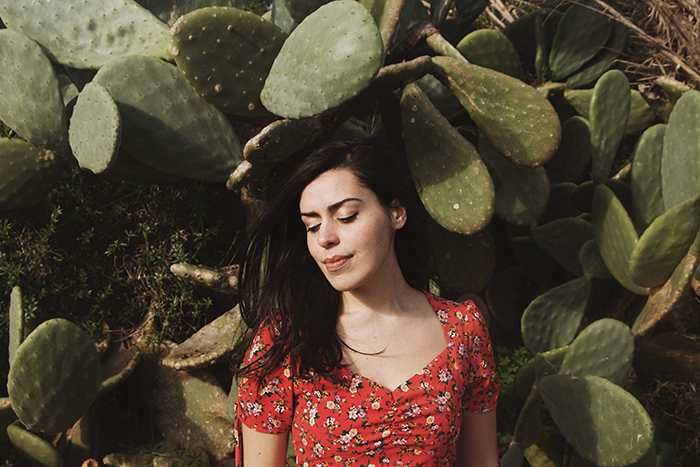 ALEXANDRA ALDEN: Maltese-born Alexandra Alden, like many, is on a search for belonging. She navigates ironic tales about the end of the world, the gentle wisdom of the butterfly effect as well as the immensity and beauty of nature through her music, with a sense of urgency and awe, that leans towards an ethereal indie folk pop sound with contrasting, darker elements. Her new album ‘Leads to Love’ is a testament to her success, leaving a trail of enthusiastic reviews in her wake, seemingly with every performance.

Alexandra has lived in three different countries and moves house at least once a year- not necessarily due to her own choosing. For some reason, she can’t seem to stay put in one place for too long. It’s in the midst of these transitions that Alden’s songs come to life, signalling the end of a chapter and the start of a new one.

Set against a backdrop of bohemian house-parties attended by musicians and artists, grubby short-term rentals and long hours of secluded writing in various rooms (and countries), Alden exudes a maturity beyond her years but understands her own naivety. Her songs saw a string of number one songs in her home-country as well as the growth of a steady cult following.

She has already performed at the infamous De Roma in Antwerp to sparkling local reviews, as well as Dutch TV broadcast ’2 meter sessies’ that has been visited by the likes of Radiohead, Nirvana, James Taylor and many more. In February, Alexandra began the first leg of her European 2022 tour with performances in Gothenburg, Stockholm and finally at Future Echoes Showcase Festival in Sweden.

From 2018 to 2020, Alden sat as a judge on X Factor Malta which saw her become a household name, where she also became known for her outspoken, bold statements in favour of Women’s Rights and Environmental Sustainability as well as striking fashion choices. Alden is never one to shy away from engaging with her audience.

The 2022 ’Leads to Love’ album tour seeks to engage with new audiences and will be supported by the Arts Council Malta.