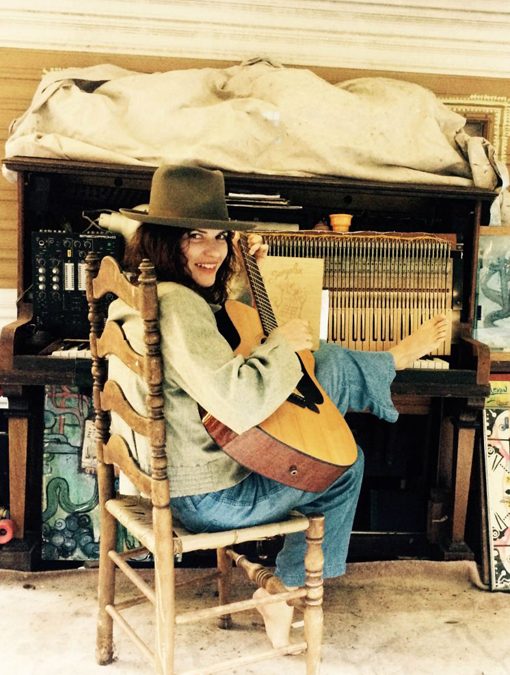 Allison Sleator  has collaborated with legendary figures such as Ireland’s treasured producer, composer and renowned bouzouki player, Donal Lunny, founder of historic bands such as ‘Moving Hearts’, ‘Planxty’, and ‘The Bothy Band’, as well as the much loved Irish biographer, journalist and poet, the late Anthony Cronin, world renowned Irish band, ‘The Chieftains’ and Declan O’Rourke, among others.

She sings as a kind of antidote, in response to our world and, tries to capture the sometimes plaintive and, candid qualities of traditional, folk and contemporary music in her work. She is interested in the more infinite concerns of existence and, explores these depths when composing her own material and singing songs from a variety of traditions and cultures around the world.

Joining Allison for this concert are three excellent and talented musicians Dan Lipman, Jo May and Ife Torentino

Dan Lipman, sax, flute and clarinet, has performed in the UK and internationally for 30 years having recorded and toured with a diverse range of artists such as Bjork,Bryan Ferry and John Cale. As Danny Sargassa he was one half of the acclaimed London based duo ‘Parsley Sound’ and is currently performing in various genres from jazz to folk to Latin.

Jo May originally studied percussion at the Royal College of Music, and began her career as an orchestral player, working with groups such as the BBC Symphony Orchestra. A trip to Sidmouth Folk Festival sparked an enthusiasm for traditional music and a change of direction. This led to her interest in West African drumming and Balafon, Afro-Cuban and Afro-Brazilian percussion, as well as folk music from the UK and Europe. Jo has been involved in many different bands and projects, which currently include Stepling, Intarsia, Token Women and a fantastic young composers’ project called Komposit.

Ife Torentino has been involved in many projects, recordings and jazz festivals as a musician, composer, arranger and bass player, in England and many European counties. In 2012 he won the Brazilian Press Award (prize for the best CD of a Brazilian artist based in UK) with the album Brazil in Black and White – a portrait of Chico Buarque. His latest album (Você Passou Aqui) was recorded in Iceland and launched in Reykjavik (Iceland), São Paulo (Brazil) and in London at the Vortex Jazz Club.