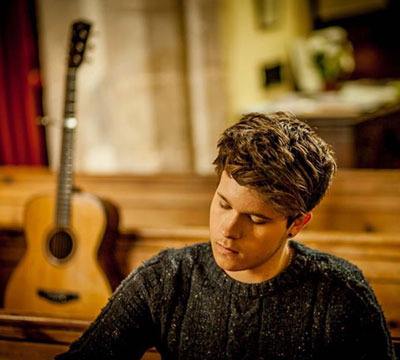 Luke Jackson is a rising young Roots singer/songwriter from Canterbury, Kent , and 2013 saw him nominated for both the Horizon Award for Best Emerging Talent and the BBC Radio 2 Young Folk Award and in 2014 he was named Fatea’s “Male Artist of the Year”

With a bold, show stopping voice and honed guitar skills, Luke is a confident and captivating performer demonstrating an astonishing maturity. He has been making waves on the live acoustic scene supporting such luminaries as Show of Hands, Karine Polwart, Oysterband and Martyn Joseph and he has delivered startling performances on the UK festival scene, from Cambridge to Sidmouth and The Great British Folk Festival. In the last year Luke as been playing Festivals across Europe, along with playing solo show in The Netherlands, Belgium, Switzerland and Germany.

Luke released his brand new studio album, “Tall Tales and Rumours” in Autumn 2016 to widespread critical acclaim and according to Acoustic Magazine, he is “an outstanding heir to the likes of Richard Thompson and Martin Simpson”. With a wealth of finely-observed narrative songs, the album emphasises the exceptional maturity and versatility of one of the most exciting young singer songwriters and live performers on the scene!

“A great singer, a great songwriter and a really commanding presence…..I watch everything this young chap does with a considerable amount of interest and an equal measure of amazement.” – Mike Harding

“Luke has a voice you could get lost in. He has a musical maturity and a songwriting ability that belies his years. His roots may be firmly within folk music but his exuberant stage performance suggests emerging rock star! “ – London Life

“Luke has already acquired both an unmistakable voice and a strikingly individual vision, so has a tremendous head start on the competition” – fRoots

“Reminds me of Jeff Buckley, which can only be a good thing” – Mark Radcliffe, BBC Radio 2