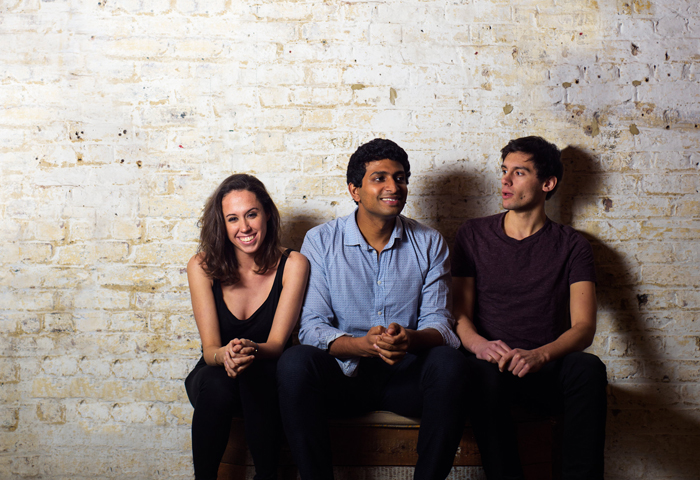 August and After are an indie-folk trio based in London. They weave together rich three part harmonies on classically inspired layers of guitar, viola, piano, synth and percussion.

Songwriters Ned and Vedantha originally met whilst studying at Cambridge. After countless nights spent honing their vocal harmonies and intricate guitar playing, they moved to London where they met Jordan, a classical violist studying at the Royal Academy of Music. The three whiled away an afternoon on London’s Southbank, talking about their favourite musicians; the likes of Bon Iver and Kings of Convenience. They formed as August and After, and after a series of sold-out London shows, support slots for artists such as Ghostpoet and Scott Matthews, a Ronnie Scott’s residency, a set at Secret Garden Party, and several European tours, they travelled to Paris to record their debut EP, Cascades, with French producer Jonathan Lefèvre-Reich.

With support from the likes of BBC 6 Music, Kerrang! Radio and a stream of online press, and lead single Wolves featured on several official Spotify playlists garnering over a million plays, the trio secured a nomination for the Unsigned Music Awards, and are now set to record their follow-up to Cascades in the summer…

Support:
Elf Lyons is an award-winning comedian, writer and theatre maker from London. In 2017 her solo show SWAN at the Edinburgh Fringe was nominated for the Best Show Award and the Malcolm Hardee Award for Comic Originality. In 2018 it was in the final shortlist for Fringe World’s Best Comedy Show award.

In August 2018 her solo show ChiffChaff  had a sell-out run at the Edinburgh Fringe.​

She recently created Medusa with the  NST Laboratory Associates at the Nuffield Theatre, Southampton – which debuted at the theatre in October 2018.

Elf has a BA from Bristol in Drama, an MA from Queen Mary in Theatre & Performance, has studied at the renowned theatre school L’Ecole Philippe Gaulier in Paris. She is a graduate of  the Duckie Homosexualist Summer School at the Royal Vauxhall Tavern and a member of  Soho Young Company’s Drag and Cabaret course.

She is currently writing a book on economics with her Dad, alongside developing a new show ‘Loves Songs To Guinea Pigs’ for Vault Festival, 2019.