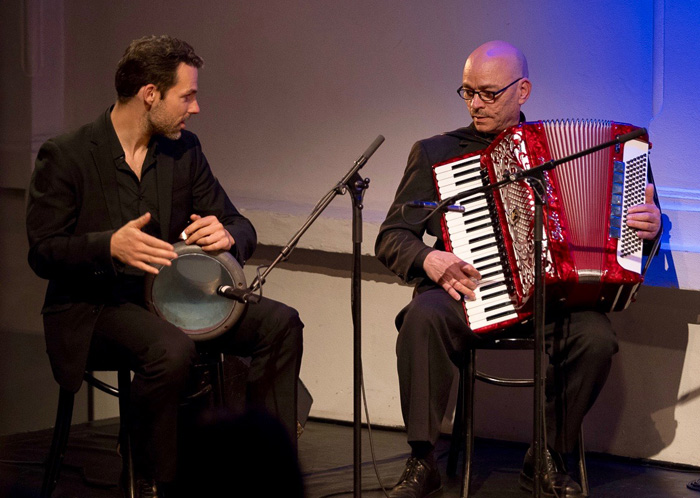 Guy Schalom, described as “one of the most interesting and versatile percussionists working in the UK today” (fROOTS) has been an ambassador of Egyptian Baladi music for well over a decade. He has released no less than eight albums with the renowned Baladi Blues Ensemble and even presented the popular BBC documentary “Bellydancing and the Blues”.

Returning to the UK (following a string of sell out events this yeat), will be the acclaimed Magdy Tewfik playing a uniquely tuned Arabic quarter-tone accordion.

Born in Cairo, Magdy Tewfik has been specialising in Egyptian accordion for over 40 years. He has worked with top dancers Sahar Hamdi, Zizi Mostafa and Lucy as well as singers Maher el Attar and Mohamed Abdel Motleb. Since relocating to Germany, he has worked with Sayed Balaha, Mahmoud Fadl and Nubian band Salamat.

Relaunching Guy Schalom’s latest CD (Baladi Blues Reloaded Vol 2), this event will be a rare opportunity to experience classic Egyptian Baladi as it was in its original context – at close quarters!