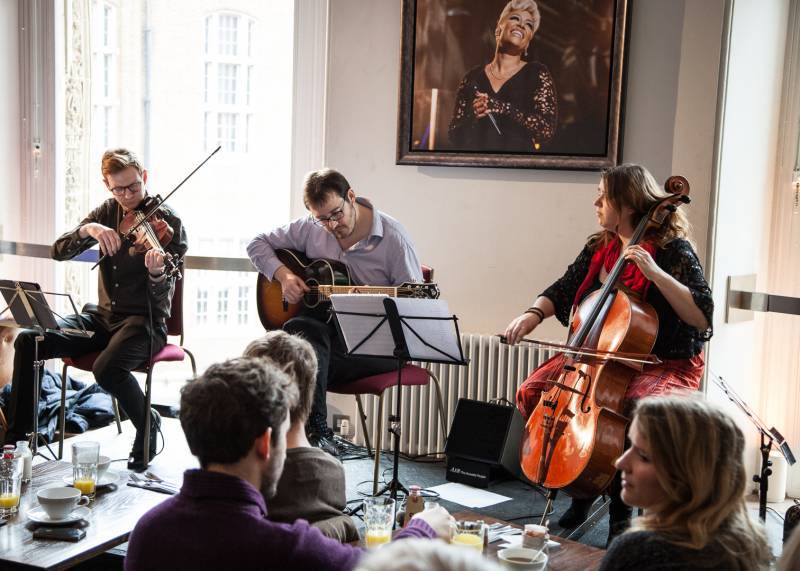 Rooted in Parisian and American Jazz – but taking in the Chaabi music of Al- geria, Balkan folk melodies and the early modern music of Western Europe – Balagan combines these thread into an elegant yet fiery fusion featuring the intimate chamber instrumentation of violin, guitar and cello.

All About Jazz gave the CD 4/5 stars and said “…an impressively diverse and enjoyable collection of tunes, played with skill and flair…cohesive and beautifully structured”, the blog Sandy Brown Jazz described the album as “really great jazz”.

Richard Jones – Violin
Richard Jones is an exciting young British violinist recognised for his innov- ative sound, approach and adaptability in bringing the violin to life within a broad range of musical contexts. Born in Wales, his musical upbringing was a diverse tapestry of experiences that ignited his passion for music and provided opportunity to explore and develop. Since completing his studies at Guildhall, Richard has immersed himself in the London jazz scene and recent collaborations include projects lead by leading Jazz musicians Christine Tobin, Mark Edwards, Robert Mitchell and Nicolas Meier.

Christian Miller – Guitar
Trading astronomy for the guitar, Christian has played and recorded with a broad cross section of London’s finest musicians including: Nigel Price, Ad- rian Cox, Mike Mondesir and Alex Garnett; US based musicians such as Gordon Webster, Brandi Disterheft and Aurora Nealand, and many others in music ranging from New Orleans jazz and swing through to bop, contempor- ary jazz and electric fusion. Having taken lessons and classes with musicians including Peter Bernstein, Barry Harris, Stevie Wishart and Dave Cliff, he aims to combine a deep re- spect for the traditions of jazz with an open mind for future directions. His projects include string fusion group Balagan Cafe Band, gypsy jazz band the Hot Club of Jupiter and electric jazz quartet Big Fan.

Shirley Smart – Cello
Shirley Smart is recognised as one of the UK’s most versatile and creative cellists. She spent 10 years in Jerusalem, where studied and performed in a wide variety of musical traditions from the North Africa, Turkey and Middle East. She has subsequently worked with many leading musicians including Avishai Cohen, Omer Avital, Yasmin Levy, Antonio Forcione, Mulato Astatke and Neil Cowley. Her own projects include leading her own trio, and the band Melange as well as a duo with pianist Robert Mitchell and Iraqi-folk based trio Sawa. She also teaches jazz and improvisation at the Royal College of Music and City University.