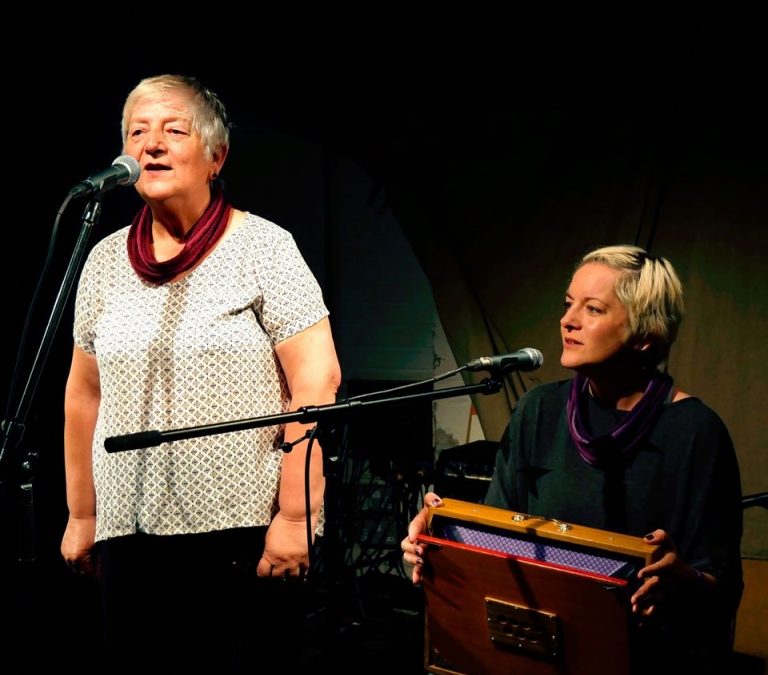 A fantastic duo who sing songs from their family and home county Essex without frills or fuss. Join them in the intimate settings of Green Note for their debut duo Album Launch released by Stick in the Wheels’ From Here Records, with special guests and support.

Belinda began singing traditional songs in the 1960s: “Our family has a history of farming and working on the land; these songs come from that way of life – at work and at play”. She met her husband in a folk club, and Fran grew up immersed in the local folk scene, learning songs from her parents from a very young age. As mother and daughter, Fran and Belinda have sung together privately for years, but it’s only now we all have a chance to hear Ian Carter’s recordings of their unique interpretations of mostly Essex-collected traditional songs. Encouraged by band and label founders Nicola and Ian, they bring timeless renditions without frills or fuss to a repertoire that is rich and varied.

Many of their songs were learned from Fran’s great uncle and farm labourer Ernie Austin, who was recorded for Topic’s ‘Voice of the People’ release ‘Flash Company’ in 1974. Austin lived and worked in the small village of Bentley, just outside Colchester, and sang songs related to his work and recreation. Stuff you’d sing down the pub.

‘Ernest Austin is now 83 years of age and he lives in a small village to the east of Colchester in Essex. He left school at 12 to work as a kitchen boy in a farmhouse, earning 3/6d in return for a 60-hour week. For most of his early life he worked on the land as a farm labourer until, with experience, he became an agricultural engineer, retiring at the age of 70.’ Flash Company, Topic Records sleevenotes

This collection of songs are made up of those taught to Belinda by Ernie and from private family recordings. Also included are personal favourites from Belinda’s repertoire: “we want our family’s music to be documented – this is the tradition of our family and singing these songs together feels like coming home”. Clay Hill Road is an area of Basildon that Belinda and Fran have always lived near.

Nicola Kearey and Ian Carter set up From Here Records to release their own Stick In The Wheel material. This has expanded into a label concerned with the transmission of English folk music and culture into the wider world, including the critically acclaimed and ongoing project English Folk Field Recordings, and now their harmony singer Fran Foote.

SUPPORT FROM BROWN BOOTS:  Brown Boots is Will Allen on melodeon and Martin Clarke on fiddle. Their musical background is rooted in playing music for dancing, as well as gaining inspiration from playing with their many talented musical friends at festivals and pub sessions across the country.