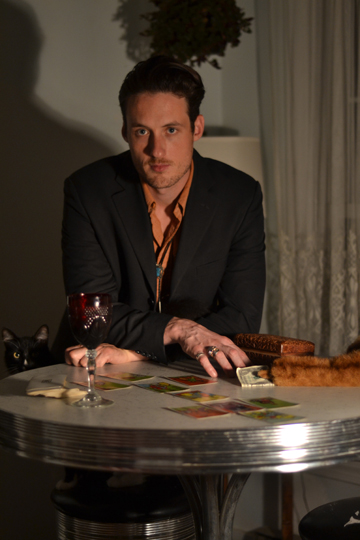 “Gruff but well-read, quiet but dancing circles on one heel in the kitchen, Ben de la Cour is the enigma, the lone picker, the troubadour, the drifter, the one man band. He is a revitalizing force.” (American Music Project)

“Ben de la Cour’s songs are brimming with urgent authenticity. There is thematic hardness and vulnerability throughout, but what distinguishes de la Cour is is the raw humanity of his delivery and the potency of his way with words.” (No Depression)

What happens when the unstoppable force of our dreams meets the immovable object of reality? It’s unclear. But BEN DE LA COUR is hell-bent on trying to find out.

Born in London and raised in Brooklyn, where he was playing New York City dives with his brother a full decade before he could legally drink, Ben de la Cour grew up listening to his parent’s diverse record collection – full of everything from Bob Dylan and The Everly Brothers to Lynyrd Skynyrd and Jimi Hendrix. While music has always been his thing, school wasn’t, and after getting kicked out of several high schools for various transgressions, de la Cour did his formative education a favor and dropped out to become a boxer. After five years of being a human punching bag, de la Cour went to Havana at the ripe old age of nineteen to train with members of the Cuban national before it eventually became clear to him that there are only so many blows to the head you can take. He packed up and headed to London with his brother in search of a different kind of hard knocks, reviving the metal band they formed so many years earlier. They lived in a van and toured around the United Kingdom and Europe, but all the while de la Cour was listening and taking notes from folk heroes like Townes Van Zandt, Warren Zevon, Jackson Browne and The Band. After an especially disastrous tour was cancelled when the bassist’s arm was broken in a drunken fight, de la Cour traded in the hesher life for a quieter and more introspective brand of songwriting, returning to the States with a head full of softer, bruised, but no less intense acoustic songs.

Following a short stint in Los Angeles where he released Under A Wasted Moon in 2010, which BBC Radio called “brilliant”, de la Cour passed through New Orleans, fell in love, and decided to stay. He would spend the next half-decade in The City That Care Forgot, playing and writing songs inspired by its emotional weight. In 2011 he released Ghost Light, which spotlighted his talent as a songwriter and received rave reviews in No Depression and other publications, with one journalist dubbing him “a vitriolic Leonard Cohen.” However, after a chance meeting with a successful Nashville songwriter in a French Quarter dive bar, de la Cour felt compelled to keep on moving. Ben recalls, “he told me that I might have something, but if I was ever going to do anything with it I had to get the hell out of New Orleans. I guess I’ve always been pretty impressionable.”

Yet again de la Cour packed his things, this time headed to Nashville where he crashed on friends’ couches and worked as a doorman in East Nashville until finding his footing in the local songwriter scene. His third album Midnight in Havana came out in 2016 on Flour Sack Cape Records and was met with critical acclaim from outlets like Red Line Roots, Nashville Scene, No Depression and The Huffington Post. That same year he won the prestigious New Folk Competition at the 2016 Kerrville Folk Festival. Reality at this point was beginning to feel a little less immovable.

The important thing to know about Ben de la Cour is that, despite the over-worn use of the phrase, he is a storyteller. “I like stories that are specific and I don’t like them to be preachy. If I think I’m being preached to or if there’s an agenda at play – I’m out of there. I think a lot of people feel the same, either consciously or subconsciously. When I say I think this album is about dissolution, I mean it on the super local, individual level. Almost all the songs are about people who feel lost in the world. How do we cope with this feeling of being lost and unmoored? What happens to relationships when they fall apart? What happens when the unstoppable force of our dreams meets the immovable object of reality? Well, what usually happens is that it turns out our dreams aren’t quite as unstoppable as we once thought! That’s the sweet spot.”

That perspective is apparent on his fourth and newest studio album. Set for release in April of 2018, The High Cost of Living Strange is comprised of eight new tracks of de la Cour’s self-proclaimed “Americanoir” style; weaving complex, mysterious and sometimes shocking storylines with a unique blend of instrumental backing and the occasional glimpse of gallows humor.

Like his lyrical attention to detail, de la Cour has a veracious studio ideology. When he started recording at Greenland Studios in East Nashville with Joseph Lekkas, the intent was to record mostly live – minimal overdubs, no headphones, one room, and just a couple of days. “I’m like a bargain basement Cowboy Jack Clement!” jokes Ben. Joining him in the studio was Jimmy Sullivan (bass, vocals), Erin Nelson (drums, but no cymbals), Billy Contreras (fiddle), Jeff Lisenby (accordion). Becky Warren and his wife Collins de la Cour both contribute backup vocals.

One thing Ben de la Cour did want The High Cost of Living Strange to do was to sound human. Some of his most introspective lyrics are found in songs like “Face Down Penny” and “Company Town”, which he wrote while on the road. “When you’re touring you do a lot of driving and you really get to see the way that corporations exert influence over every facet of American life… that’s the world we’re living in now. We have this illusion of control and freedom but in reality for the most part we’re all living in a company town.” Listeners hoping for some of de la Cour’s more terrifying tales need look no further than “Tupelo”, a claustrophobic and hypnotic homicidal minor-key stomp inspired by a chance late night meeting. “There’s an older lady in East Nashville who always needs a ride, and I’ve picked her up a few times. One time I got to thinking; there are only two types of people in the world – people that pick up a hitchhiker and think of all the ways they could kill or be killed by that person… and liars.” “Dixie Crystals” is a scorched earth tale of methamphetamine addiction set against an unforgiving southern hellscape, while “Uncle Boudreaux Went to Texas” and “Guy Clark’s Fiddle” are beautiful narratives about broken-hearted dreamers waking up in a world they never felt like they belonged in, but are still doing their best to love anyway.

What each of the eight songs have in common is the sense of searching for beauty and meaning in dissolution – the realness of things falling apart, feeling lost, the limits of reality… The High Cost of Living Strange may seem bleak, but never self-consciously so, and there is enough humor and hope in even the bleakest moments to tell us what we all need to hear sometimes; it’s okay to be human. At least until a better alternative comes along.

A talented singer/songwriter based out of North London, Roisin McNeill, first caught the publics eye as lead singer for Country/Americana band, Newton Country, playing for multiple Under The Apple Tree sessions with Bob Harris, and played a live session at BBC Radio 2 on the Dermot O’Leary Show. Roisin writes tender, Country-inspired songs, and draws inspiration from Iris DeMent, Jason Isbell and Lori McKenna.