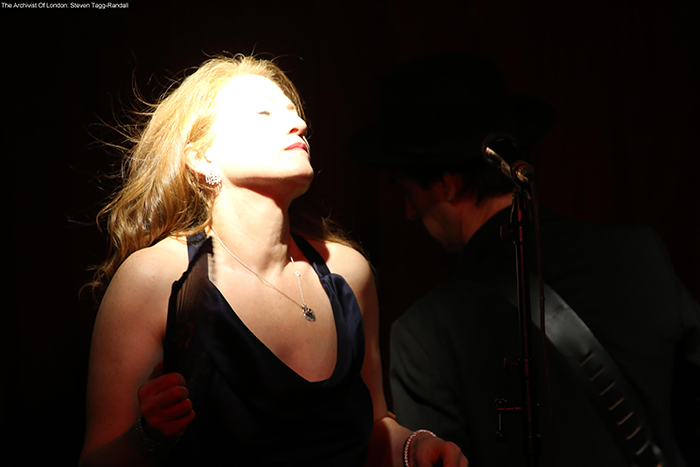 BIG MAMMA’S DOOR: Regulars on the London blues scene, and fronted by the ballsy vocals of Fiona McElroy, Big Mamma’s Door play an eclectic mix of swinging blues from the 20s-50s.

“Big Mama’s Door are led by the delightfully charismatic young colleen with the ballsy vocal style, Fiona McElroy… couldn’t give a disappointing performance if they tried”
Brian Clarke, UK Rock

“There’s no question that the UK has a fine new crop of female singers who like to sing the blues, & rockin’ rhythm & blues too…. having recently seen, in live performance, a band by the name of Big Mama’s Door, you can safely add Fiona McElroy” Brian ‘Bunter’ Clark, UK Rock Magazine

“Fiona McElroy Whipped the crazy crowd into a clamour and is enjoyably more Etta James than Janis Joplin in her approach. Her gutsy vocals were matched by playful Irish banter between numbers. The crowd had no choice but to enjoy things enormously…” David Atkinson, Blues in London

“London based Big Mama’s Door play their brand of Sexy 50’s RnB with a whole lot of professionalism and love for the blues…the music is just top notch.” Bobjte, Bobtje Blues

“This is an engaging and highly energetic band…the audience was wowed by the sheer personality of Fiona as a performer, the artistry of the guitar and the musical excellence of the rest of the band.” Bill Smith, Blues in Britain

“Excellent band…her smoky/laid-back voice does the risqué blues-with-soul stuff with a
vengeance.” Ian McKenzie, Blues in the South

“A fabulous, sassy lady at the front sensitively phrasing the melodies. Fiona McElroy fits the template as though specifically designed for her”. Blues Show Bob, GTFM Blues Show