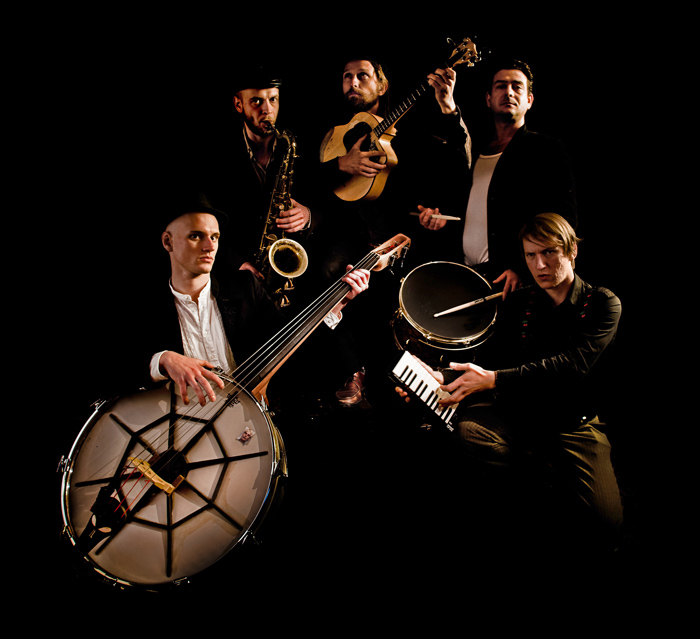 Founded in 2008 by five local Berliners, BudZillus have developed into one of the German capital’s most successful bands; their first two albums presenting a mix of swing, punk and balkan beat that created a very own Berlin-sound that started on the streets.

After more than 500 concerts, nationally and internationally, including tours in the USA, Russia and Mexico, the band have earned themselves a loyal fanbase, filling concert-halls with 500-1000 capacity. The well-known Berliner Schnauze meets international flair and hand-made warmth. BudZillus’s concerts are like a big balkan wedding party – people singing along, people dancing, people sweating, both on stage and in front of it.

“It’s insane balkan music, crazy like a young monkey, musically a wild mix of styles – a bit of swing, a bit of ska, a lot of polka. But it’s not about the genre, it’s about the huge excess in itself, the exuberant, pure energy. The jokey lyrics are thrown out like you’d chuck vodka glasses at a wall with the aim of shattering them today to find happiness tomorrow.” – FAZ

“Kondorosi and his band spun through everything from hot jazz to punk, swing, polka, blues and oriental melodies, bringing many influences together, leading to a fiery gumbo that impressed all of the wedding guests and left them hungry for more of the new sound they’d heard.” – Tip Berlin

“The only people as wild, true and balkan-punky as the boys on stage are their fans. It really was a beautiful picture how this show came together.” – Der Westen

“It doesn’t surprise us that the fanbase around Belin Quintet BudZillus – with their wild mixture of swing, hot jazz and balkan folklore – keeps growing, and that the band continue to impress new crowds from New York to Moscow.” – Darmstädter Echo Online

“How five Berlin-boys with German lyrics conquered the Russian soul, and got it to dance” – Headline in the Moscow edition of the Deutsche Zeitung

“BudZillus-concerts have come to be synonymous with a big party, not only because of songtitles like “Immer Wetier”, “Stupid Song” and “Devil’s Polka”, but also because of their longstanding reputation as a great live band.” – Choices