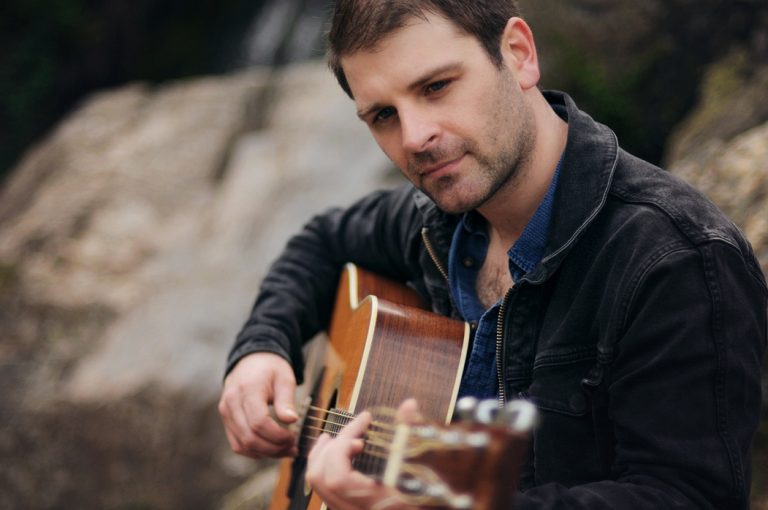 CHRIS QUINN: Growing up in British army quarters in Germany surrounded by Celtic music, bluegrass, roots music and jazz, Chris was heavily influenced by British folk and American roots music from a very early age; often straight from the many touring musicians passing through to visit and play music with his father, an active member and club organiser on the forces folk scene. Fast forward a couple of decades, The Shrewsbury based singer songwriter and acoustic guitarist Chris Quinn has been receiving glowing reviews in the mainstream UK music press for his own debut solo release “Across The Divide”. Maverick Magazine named him “A Master of the Acoustic Guitar and a quality Songwriter”. Live, Chris’ shows cover a wide range of acoustic music alongside his own material. From authentic interpretations of traditional and contemporary British folk songs to lightning quick bluegrass flat picking and from intricate finger style delta blues and swing jazz numbers to instrumental solo guitar pieces.  Chris has carved his trade for over a decade touring worldwide, along the way he’s taken in shows at venues like BB Kings New York, Cambridge Folk Festival, London’s Royal Albert Hall and had a stint as the opening act for the Jools Holland orchestra.

When not playing his own brand of solo acoustic folk and roots music Chris also performs regularly as an accompanying guitarist for some of the worlds very best gypsy jazz guitarists, most notably as a regular member of the Robin Nolan Trio and with gypsy legend Paulus Schafer.  Over the past few years Chris has played live concerts and studio recordings with many renowned acoustic artists from the folk, jazz and blues worlds; Eamonn Coyne, Frank Vignola, Clive Carroll, Cormac Byrne, Gary Potter, John Doyle, Dan Cassidy, Dan Walsh, Arthur Ebeling and Tim Kliphuis to name a few. He’s shared the bill and been invited to open shows for some of the biggest names in music; artists like Katie Melua, The Levellers, Bellowhead, Seth Lakeman and Loudon Wainwright III.

“Across the divide, the debut album from Chris Quinn, is the kind of quality release that should propel him to the forefront of the new generation of musicians currently performing on the folk music scene” ACOUSTIC Magazine

“World Class… Constant international touring over the last decade including a stint opening for the Jools Holland Orchestra as well as playing rhythm guitar for some of the world’s leading gypsy jazz guitarists has given this Shrewsbury born acoustic guitarist and vocalist an enviable confidence.” SONGLiNES Magazine