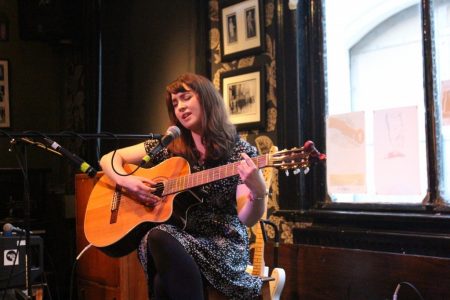 Hailing from the darker edge of the folk spectrum, the tried and tested Singer Songwriter path has been given a breath of haunting melancholy with Ciara O’Neill’s debut album ‘The Ebony Trail’.

Displaying both strength and fragility in her stunning live performances, this collection of songs showcases Ciara’s ‘beautiful, haunting vocals’, ‘poetic songwriting’ and her ‘complex and subtle guitar playing’.

The legendary Tom Robinson from BBC 6 Music chose Ciara as one of his ‘Fresh Faves’ on his ‘Fresh on the net’ podcast and has played her songs numerous times on his popular 6music radio show in London.

Ciara has spent much of the last few years in Nashville TN. Here she has been writing songs, meeting with publishers and other industry professionals, as well as playing shows in legendary venues such as The Bluebird Cafe and Music City Roots.