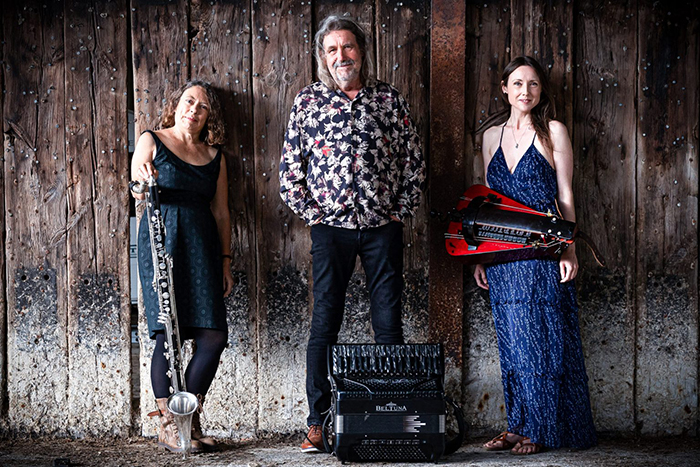 Coracle brings together the talents, imagination and creativity of three artists with vastly different backgrounds, who have come together through their love of traditional music cut through with experimentation, boldness, humour and risk.

Expect ethereal to turn gutsy, passion to be tempered by a good laugh and a tide of improvisation which means no two evenings are ever the same.

Be thrilled by the silvern voice of Anna Tam, the free flowing mix of reeds…..clarinets and accordion….cello, nyckelharpa, viola da gamba and hurdy gurdy.

With the British folk tradition at its very heart with eddies of contemporary classical and splashes of early music, ebbs and flows, squalls and flurries – each gig is a exhilarating journey of exploration and enjoyment.

Anna Tam was shortlisted as Fatea’s 2021 Instrumentalist of the Year, adds nyckelharpa, viola da gamba, hurdy gurdy and cello alongside a “gin pure” voice. With a background in classical music and a spell as a Mediaeval Baebe, her move towards folk with her debut album Anchoress, which brought her widespread acclaim. Her second album will be released later this year.

They came together during lockdown, when individually they were experimenting beyond their usual repertoire and looking to embrace new influences and sounds. Improvising and recording with other musicians around the world with a similar sense of musical adventure, they were inspired to take things furher. Coracle is the result.