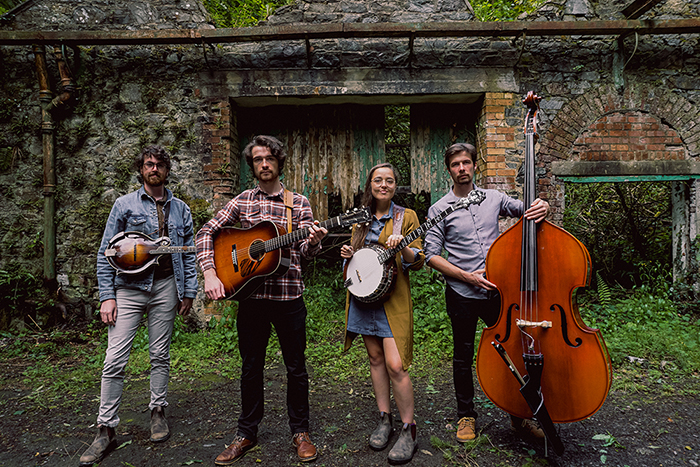 CUP O’JOE: Cup O’Joe is a progressive bluegrass and folk band founded and based in Northern Ireland by three siblings, Tabitha, Benjamin and Reuben Agnew, and later joined by Tabitha’s husband David Benedict. Their unique mix of original compositions and re-imagined traditional songs paired with their lively performances has given them a growing presence in the acoustic music scene surrounding Ireland, The United Kingdom, Mainland Europe, and beyond.

Their quartet lineup features tight sibling harmonies, tasteful arrangements, compelling originals and virtuosic solos. Tabitha Benedict brings her unique style of banjo playing and delicate vocals to the group, which were both recognised by the IBMA (International Bluegrass Music Association). She holds the 2020 Momentum Instrumentalist of the Year Award. Her sensitive and tasteful touch on both banjo and lead vocals blends effortlessly with her bandmates. Reuben Agnew’s phrenetic guitar breaks, rhythmic drive, and unwavering vocals make him another pillar of this group’s sound. Both Tabitha and Reuben are songwriters with a rare understanding of their own creations and what they want the listener to hear. David Benedict, the newest addition to the group, is a mandolin player of the first order. His leading style of playing is described as “thoughtful, elegant and tastefully complex.” Winner of the IBMA Momentum Award for Mandolin in 2018, his mandolin playing is intricately sophisticated, while also being well established in the deep understanding of the instrument’s heritage and early sounds. He plays like he has been with the group since the very start, slotting in on the backbeat effortlessly. Benjamin Agnew beats out the all-important bass tones and lead vocals–oftentimes giving the impression he wandered on to stage by accident, but flawlessly holding the backbone of the music.

This band has toured extensively in Ireland, The UK and Europe. Cup O’Joe have made their name known among the folk and bluegrass circuit internationally, with appearances at Celtic Connections, IBMA in North Carolina, and the Omagh Bluegrass Festival in their neighbouring county. In 2015 the band were runners up in the BBC Radio 2 Young Folk Awards, as well as being the first youth band to showcase at IBMA in Raleigh, North Carolina. They have not only made a name for themselves on the touring circuit, but have also appeared in several BBC television documentaries. Some of these have included Burns Night 2019 at Titanic Belfast with Aly Bain, Phil Cunnigham, and Eddi Reader, as well as taking part in the televised series “Sam Henry: Songs of the People.”

In January 2020 they released In The Parting which features nine original songs and one reimagined traditional song from their native Ulster. This new album embodies their fresh new original sounds of progressive bluegrass and Irish folk roots. For several tracks they are joined on fiddle by Niall Murphy (Breaking Trad, Cara Dillon, Nathan Carter) as well as Josh Clark, Dave Molloy and Eilidh Patterson.

Most recently they have released their first collection of Christmas songs, in their five-track EP, Christmas Kin. This short but sweet collection displays a refreshing take on several holiday favourites including In The Bleak Midwinter and Holly Jolly Christmas, as well as the traditional carols Sussex Carol and The Holly Bears a Berry.

“They make a truly gorgeous sound and play with such intuition as only a family can do.” Cara Dillon
“Imagine what these young artists will accomplish before they’re done” Bluegrass Today