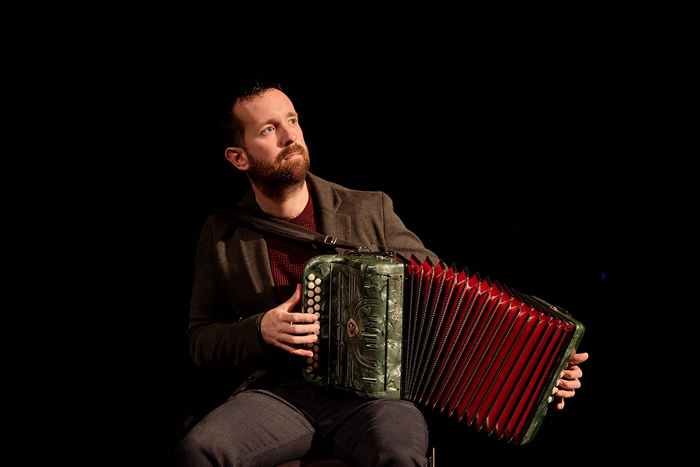 Damien O’Reilly is a traditional accordion player and teacher from Corofin Co. Clare. He has toured and played throughout Europe and all over Ireland. In the recent past Damien has collaborated with many greats of Irish music including Frankie Gavin, Noel Hill, Mary Bergin, Tony Linnane, Liam O’Connor, Conal Ó’Gráda, John Carty, James Cullinan, Caitlin nic Gabhann, Kieran Hanrahan, Jack Talty, Mulcahy family, The Raw Bar Collective,  and the Kilfenora Céilí band among others.

Along with his brother Padraic, Damien founded the renowned Corofin Traditional Festival in 2001. The festival has brought back music to the village of Corofin and is a highlight for many of Ireland’s leading traditional artists. His roles over the years have been musical director, chairman and programming the festival for which the festival has received funding from national institutions. In 2011 Damien produced the critically acclaimed compilation album “Teach Ceoil Concerts – 10 years of the Corofin Trad Fest” as a festival fundraiser.  The festival was the first recipient of the MÓR Glór awards back in 2014 as recognition to its contribution to the traditional community.

Damien’s music is heavily influenced by the great accordion/melodeon players from the 1920s right up to the modern day players. He immersed himself in the music of P.J. Conlon, John J. Kimmel and also the Flannigan brothers. Musicians from the North Clare area like Paddy Mullins, Austin Tierney, Jimmy Ward, and Gerry Lynch all had a significant impact on Damien’s style. From a young age he has had a keen interest in fiddle music paying particular attention to Michael Coleman, James Morrison, Paddy Killoran, the Clare fiddle giants of Joe Ryan, Bobby Casey, Junior Crehan, John Kelly and Patrick Kelly. Various music form the 1950s onward with musicians like Joe Cooley, Paddy O’Brien and the Kilfenora Céilí Band have left on impression on Damien. Bands like De Danann, the Bothy Band, musicians Noel Hill, Frankie Gavin, Tommy Peoples, Matt Molloy and Seán Keane (to name a few) all recorded music from the 70s and 80s that Damien couldn’t get enough of. The accordion players which have had a great influence on Damien’s playing include Martin McMahon (Clare), Tony McMahon, Paul Brock, Finbarr Dwyer , Joe Burke, Paddy O’Brien, Jackie Daly, Máirtín O’Connor, Colm Gannon and Derek Hickey. Coming from North Clare, the region has been imprinted in his accordion playing and one can hear the strong rhythmical connection to North Clare whenever Damien plays.