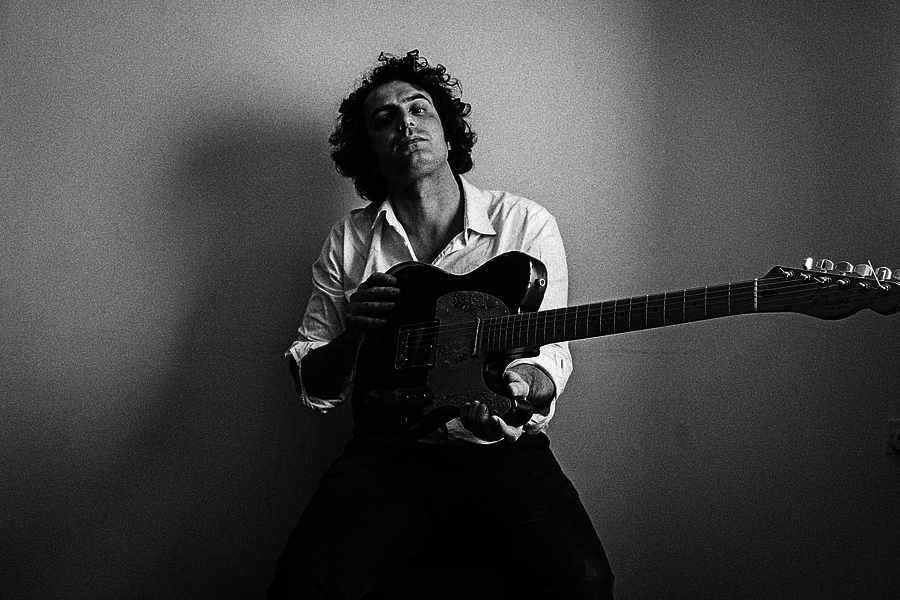 His career to date is a story of slow burn success, built upon positive word of mouth for his three self released recordings and the many thousands of long, hard miles he’s spent touring around Europe, opening for a diverse range of talented artists including Josh Ritter, Julian Cope, Maria McKee, Mark Eitzel, Jesca Hoop, Peter Green, Richard Thompson, Lau, Sun Kill Moon and Willy Mason.

Dan was born in the midlands industrial town of Wolverhampton to parents who took ‘the hippie highway’ to Kathmandu in the mid 70’s, on the ‘magic bus’. The sights and sounds on that journey resonated throughout Dan’s childhood and despite being born in England, Dan took his first steps in San Francisco, to a soundtrack of Jackson Browne, Donovan and Bob Dylan.

When his younger sisters were born Dan’s parents settled with teaching jobs back in Wolverhampton, but kept the travelling spirit alive through summer, packing the family of 5 into their secondhand car and taking off to France. Whenever they pitched their tent, Dan would take off in the morning with his guitar down by the river, or out in the fields, hiding out learning to play Neil Young’s ‘Needle and the Damage Done’ or Otis Redding’s ‘Sittin on the Dock of the Bay.’

Music was always going to play a huge part in Dan’s childhood as his radio enthusiast father helped establish Wolverhampton Community Radio in the mid eighties, and presents his Inside Tracks show on the station to this day. Dan Whitehouse grew up with the notion he wanted to make something beautiful and musical out of the mundane.

He took his time, listened to everything he could get his hands on, played in other people’s bands, recorded sessions as a guitarist and honed his songwriting and live performances. He attended a workshop by Tom Robinson in 2008 which inspired him to try the ‘immersion method’ of writing, whereby the writer plays a series of musical and lyrical composition games and other un-orthodox techniques to unlock their creativity.

Inspired and having cultivated a devoted following for his timeless, soulful and personal songs Dan Whitehouse signed to Reveal Records in 2015 and started work on his new album ‘That’s Where I Belong”.

Touring Canada during the winter he felt liberated and free staring out into the vast vistas. By day he saw jaw dropping, epic landscapes, at night he played gigs where Canadian audiences made Dan feel so overwhelmed by their warmth in response to hearing the new songs.

For the first time since he was a child, Dan felt his perspective shift far into the future, and things started to look yet brighter with the birth of his first child. Reveal Records issued a limited edition 8 song introduction EP for Dan’s April tour with label mates Eddi Reader and Kris Drever that showcases his concert set. ‘Introducing’ features songs recorded live in the studio, played solo electric, alongside versions of album tracks and well chosen covers of acclaimed folk singer Chris Wood and Cowboy Junkies (who’s founding songwriter and producer Michael Timmins, Dan recorded with whilst in Canada).

September 2016 see’s the release of his new album That’s Where I Belong. The songs are steeped with new found positivity and deal with emotional well being and anxiety, mental health (CCC, Little Left Unsaid) issues. Political stories of displacement and refuge (Close Up) sit beside more personal reflections and universal themes such as family and love, loss and compassion. The lyric to his song Work speaks about the daily grind of brick building within relationships – being prepared to sit and listen to the words of your other, giving them the time and respect they truly deserve, lyrically, this is not run of the mill romantic stuff.

Most of the songs were written either on guitar or piano in an old industrial factory building, part of Birmingham’s famous Jewellery Quarter.

The lyric to the first single That’s Where I Belong refers to the higher places we are able to take each other within our conversations. The song talks about feeling really together with the right person, how the small details of expression are magnified, and how we can comfort or disarm one another easily and swiftly – with a mere glance, light touch, or tone of voice.

Dan collaborated with several great musicians on the record. Pedal steel legend BJ Cole played with deep musical expression on The Places We Have Been, whilst drummer Steve Brookes (Danny The Champs) helped Dan realise his rhythmical vision and create music you can really move to.
Producers Danny Wilson and Chris Clarke (The Rockingbirds) encouraged Dan to start the recording with drums, keeping the feeling joyous and alive, they later dubbed his sound ‘Black Country Soul’.

Whenever he’s home, Dan likes to work in his local community on projects using music in a therapeutic way with people with learning difficulties, or brain injury, disaffected youngsters in PRUs (pupil referral units). This has been a liberating experience and in May 2016 the Birmingham Mac Theatre will play host an exhibition of Dan Whitehouse songs produced within its walls entitled “Life of A Song”.

A limited edition version of the new album comes with a second disc featuring 9 additional songs, The Kyoti Sessions, recorded live in the studio by Mark Freegard. Following the sessions, Dan was introduced to an old song by Geoff Farina (of the band Karate) called The Left Handed Way. Dan pressed record and his original, one take demo version is included as the closing track on the album That’s Where I Belong.

Whatever the next chapter for the Birmingham (UK) based songwriter is, Whitehouse the artist is primed, in the richest vein of form of his life,
with great songs to spare.