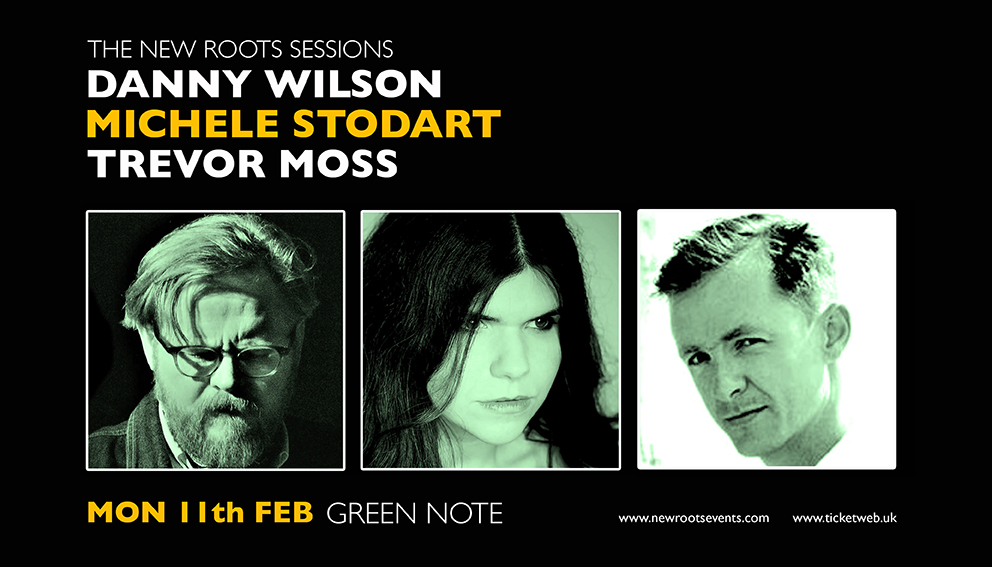 THE NEW ROOTS SESSIONS: Three giants of UK roots music in solo guise – Danny Wilson (Danny & The Champs/ Grand Drive/ Bennet Wilson Poole), Michele Stodart (The Magic Numbers) and Trevor Moss (Trevor Moss & Hannah Lou) take to the stage for a superb, stripped back, intimate triple bill.
DANNY WILSON:
Danny Wilson’s formidable credentials go back to his days in seminal UK roots rock band Grand Drive with brother Julian, followed by six albums of consistently high calibre output with his enormously successful Danny & The Champions of the World incarnation. In 2016 the band swept the boards at the first UK Americana Awards, winning with Album, Artist and Song of the Year. Alongside Robin Bennett (The Dreaming Spires, Goldrush, Saint Etienne) and Tony Poole (Starry Eyed and Laughing) he has recently formed Bennett, Wilson, Poole (“instant classics… hints of Willie and Levon” Bud Scoppa, Uncut), named Americana-UK’s ‘Band Of The Year’ 2018.
“Some things remain constant… not least Wilson’s unfailing feel for Southern/Celtic soul melodies, and his eloquence of sentiment never allowing affection for his inspirations to lead him in the direction of pointless pastiche when he could break your heart or make you smile instead” MOJO
“One of my favourite-ever songwriters… ;
STEVIE CHICK (THE GUARDIAN)
MICHELE STODART:
Michele Stodart’s career with the Magic Numbers has taken her around the world, to the biggest stages, selling huge amounts of records and receiving a Mercury nomination along the way. She has to date released two critically acclaimed, beautifully written, roots and soul-drenched solo albums.
‘Stodart’s solo career..sits in a rich tradition that encompasses such touchstone female performers as Karen Dalton and Judee Sill…Etta James..Alison Moorer [&] Gillian Welch. Pieces may well be the most impressive record she’s ever made, with or without brother Romeo and band’. MOJO Magazine
TREVOR MOSS:
A hugely respected figure in the world of contemporary UK folk, Trevor Moss has spent the last ten years performing as a duo with his wife Hannah-Lou, releasing four albums with with producers such as Ethan Johns (Ryan Adams/ Laura Marling/ Kings of Leon) , Richard Causon (Lucinda Williams/ The Jayhawks/ Alanis Morrisette) and Dan Carey (Kate Tempest/ Nick Mulvey/ Willy Mason). He has toured the world and supported, amongst others, Tori Amos, Ron Sexsmith, Damon Albarn and Loudon Wainwright, performing everywhere from The Royal Albert Hall to the Ryman Auditorium, and festivals including Glastonbury, Cambridge Folk Festival and Green Man.

New Roots is committed to promoting events that shine a light on up and coming talent in the UK alt-folk scene. It’s committed to providing artists with an environment that is sympathetic to what they do, giving musicians the respect they and their music deserves – for this reason we ask for no talking and no use of mobile phones while artists are performing. Our music policy comes from the kitchen table, the roots of public performance- intimate, acoustic based, high quality musicianship with as little interference between performer and listener as possible.
Website: www.newrootsevents.com
New Roots Radio: https://www.mixcloud.com/RadioNewRoots/