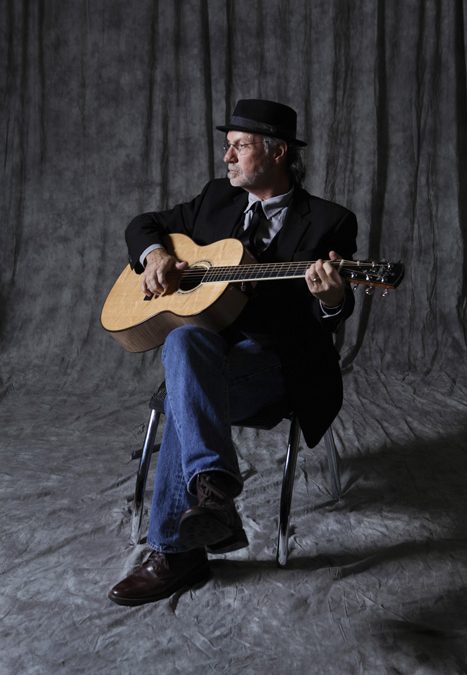 “David Starr has a voice you will never forget. His music is authentic, his songs are honest, full of emotion and truth. The Head and Heart is a showcase for his classic songwriting style and wonderful guitar playing.” – John Oates

David Starr owns a thriving guitar store in the heart of Cedaredge, Colorado, yet he believes his most compelling instrument is his voice – a strong, beautiful baritone that is the cornerstone of his EP, The Head and Heart.

Starr wrote or co-wrote five of the six songs on The Head and Heart, which was produced and arranged by John Oates and recorded in Nashville. The longtime friends decided to let the recordings have some breathing room, while still giving the city’s brilliant session players an opportunity to shine.

“I’ve always done my own producing and it was liberating to let someone else take the reins,” Starr says. “I told John, ‘I really want you to push me to sing better.’ I have a tendency when I get in the studio to say, ‘Yeah, that’s in key and I got all the words right. Let’s move on.’ On a number of songs, he said, ‘That’s great. Get back in there and do it one more time.’ I can hear where he pushed me a little bit.”

The Head and Heart begins elegantly with “Edge of the World,” which began as a story about the complexity of women, but also applies to the mysteries of music. The thoughtful title track conveys that dramatic distance between what you think and what you feel.

It was Oates’ suggestion to include The Mamas & The Papas’ classic “California Dreamin’.” Without the familiar four-part harmonies of the original recording, Oates’ atmospheric production draws attention to Starr’s soulful singing.

“I like John’s energy and his work ethic,” Starr says. “He’s willing to take a song and reimagine it in any number of ways. In other words, just because you’re locked into hearing it a certain way doesn’t mean that’s the only way.”

Starr’s intriguing melodies elevate songs like “Waiting in the Dark,” which alludes to the drug addictions that haunted a number of his friends in the 1980s. Meanwhile, “I’ve Come for You” hints at timeless late-night temptations. “Dancing With My Pride,” co-written with his friend Bob Liepman at a songwriting workshop in California, is inspired by a character in a book written by his grandfather Fred Starr.

David Starr grew up in Northwest Arkansas and started playing drums at 10, then picked up guitar at 13. He has released eight albums (including The Head and Heart) and opened shows for Survivor, Clint Black, Restless Heart, The Marshall Tucker Band and The Guess Who.

He launched Starr’s Guitars in Little Rock in 1998, then relocated to Cedaredge in 2001. Today, the store is such an institution that Cedaredge proclaimed the musician’s birthday as David Starr Day in 2016. The year before, Starr released the album Love and Sabotage with special guests like John Oates, Richie Furay, Dana Cooper and Steve Cropper.

As with previous albums, Starr is planning to divide his time between operating his guitar store and touring internationally to attentive, appreciative audiences.

“In a perfect world, I would be playing in a room where everybody’s listening,” he says. “That’s why I like a situation like a house concert or listening room because I like to tell a story. I like to talk about the inspiration behind the song. I just like connecting and that’s what I hope to do with this new music.”