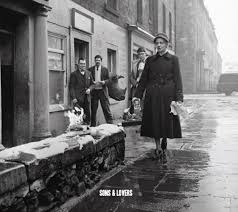 Meet a bunch of classically trained washboard & kazoo players, hailing from the green hills and valleys of ‘Lawrence county’ … Some say, these folks have spent too long in the woods drinking moonshine!

“… like a breath of fresh air in a crowded musical marketplace … with their subtle mix of traditional British Folk Music and Bluegrass, and an emphasis on witty Americana-flavoured lyrics”  – NO DEPRESSION