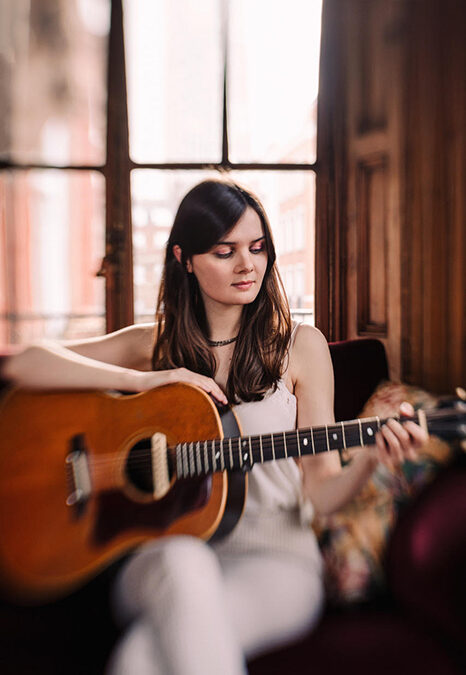 ELLA JANES: Independent folk artist Ella Janes built a loyal following busking on the streets of her hometown Winchester, following in the footsteps of Simon & Garfunkel and French songstress Françoise Hardy with her romantically contemplative songwriting, nostalgic lyrics and finger-style guitar playing. She has performed at two TEDx events and opened for Jools Holland on his 2018 UK tour, finishing with a show at the Royal Albert Hall in London. The following year, she successfully crowdfunded her debut album ’The Hypnotist’, which was released in 2020.
Janes’ long-awaited debut is a narrative of heartache, letting go and ultimately: acceptance. Her storytelling revolves around milestones from the past decade of her life, from a traumatic first relationship to her father’s relocation to California. The album revisits her time living abroad in France in the nostalgic track ‘Nantes’, as well as featuring an original song written in French, which was inspired by the likes of Jacques Brel, Edith Piaf and Barbara.
.
BURR ISLAND: Once upon a time, there was a brooding, beardless man named Tom and a brooding, not-so-beardless man named Oscar.  Tom was raised in a land called Frome. Frome was known for its infinite pottery shops, cheese festivals and Glastonbury-going flower-children of the past. Oscar lived his early years deep in the south west of Hobbit country in a little village called Aveton Gifford where mythical creatures spent their days trading limericks and fiddlesticks.
Years later, Tom and Oscars’ strange cobbled paths met in a distant kingdom called Guildford. Unable to speak each other’s mother tongue, they both sang the first note that came to their heads… at the same time.
It is said that, in that moment, they produced a harmony that was so rich and unified that even the earth itself had not heard such a sound.
Suddenly, the elements reacted, lifting the boys up off their feet. The sky engulfed them and the wind and rain raced past, hurling their twisting bodies. Still, they sang!
At last, the clouds broke and their breath grew tired. Slowly, Tom and Oscar wafted down like seeds from a maple tree towards what appeared to be… a bed of sand.
They had landed on what would later be known as…
Burr Island.

Burr Island are a new folk-pop duo whose influences range from all the classic folk artists of the 60s to more contemporary artists such as Johnny Flynn and Laura Marling. Their sound is stripped back and acoustic with searching melodies, close harmonies and introspective lyrics, and will appeal to fans of Simon & Garfunkel.