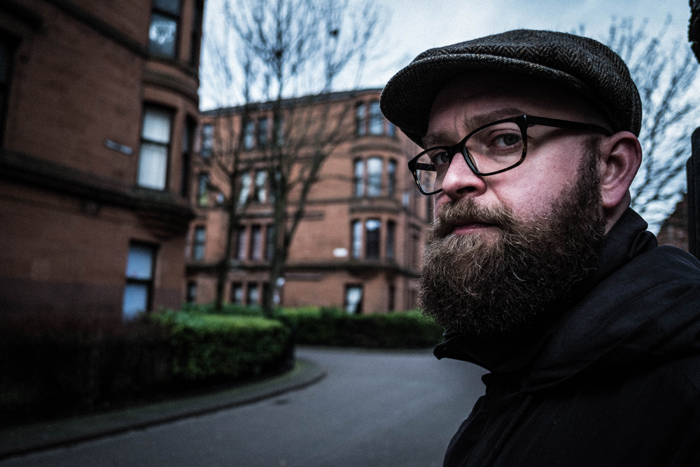 Co-written and produced by revered UK songsmith Boo Hewerdine, VIP’s ten biographical tracks, invoking real-life sources from Hedy Lamarr to a cave-dwelling Scottish tramp, marked another career high for Napier, building on plaudits and awards for his previous line-ups Back of the Moon, Queen Anne’s Revenge and The Bar Room Mountaineers.

Continuing his collaboration with Hewerdine, the new album combines freshly-penned originals with classics and rarities from Glasgow’s vast and colourful ballad canon, by authors as diverse as Hamish Imlach and The Blue Nile. Together, they form an extended musical love-letter to Scotland’s metropolis, celebrating 20 years since Napier first arrived as a student, swapping his idyllic Highland childhood home for the 14th floor of the city’s notorious (and since demolished) Red Road flats.

“It was a bit of a culture shock,” he affirms, with characteristically wry understatement. “But that was where I first encountered the kind of crazy characters Glasgow seems to produce: it was like living inside some kind of mad cartoon at times.”

In the two decades since, Napier’s career has evolved symbiotically with the now world-famous music scene – famous across genres from progressive folk to avant-pop – that’s earned Glasgow its title as UNESCO City of Music. Napier’s own songcraft today vibrantly reflects this increasingly rich stylistic melting-pot – a mix he’s played no small part in creating, especially the cross-fertilisation between Glasgow’s folk and indie communities,

as both co-host (with Admiral Fallow frontman Louis Abbott) of a long-running open-mic night, and promoter of the decade-old Hazy Recollections concert series.

In 2016, too, Napier launched the Glasgow Songwriting Festival, a weekend of workshops and performances which completely sold out its inaugural outing, and returns in 2017: featured artists to date include Karine Polwart, Emma Pollock, the aforementioned Abbott and Stanley Odd MC Dave Hook. In between putting the finishing touches to Glasgow, Napier also toured in spring 2017 with acclaimed contemporary protest-song showcase Shake the Chains.

Despite these ecumenical enthusiasms, Napier himself remains happy to identify as a folk singer – even if he does enjoy stretching the term’s already elastic parameters. “I do fit that one-guy-with-a-guitar template,” he says. “Plus, you can’t be indie when you’re nearly 40 and bald. But it’s also good fun when I’m playing to a non-folk audience: I’ll go on and say ‘Hello! I’m a folk singer. So please feel free to join in’ – you can see the fear on their faces. I like playing with other people’s stereotypes.”

It’s also a definition true to Napier’s earliest inspirations. He grew up in a musical family (brother Hamish is also a leading musician), and while early piano lessons proved a non-starter (“I just had absolutely no interest in classical music whatsoever”), singing was part and parcel of everyday life: “We’d always sing in the car, on long drives to visit family and so on.” Also from an early age, Napier would spend hours immersed in favourites from his parents’ extensive record collection, including classics by the likes of John Martyn, Paul Simon, Gerry Rafferty and Paul Brady: “Even then, I really, really obsessed over songs,” he recalls. “I would learn entire albums – memorise all the lyrics, the names of all the musicians in the credits.”

As with many of Scotland’s under-40 generation of folk-based artists, these nascent passions were brought fully to life by Napier’s involvement, from age 12, in the Highlands’ Fèis network of youth music festivals, whose tutors quickly spotted and encouraged his vocal talent, meanwhile steering him to learn guitar. A particular mentor was the great Highland singer-songwriter Jim Hunter, at whose urging Napier successfully applied for the new Scottish Music degree course at the then Royal Scottish Academy of Music and Drama (now the Royal Conservatoire of Scotland), moving to Glasgow to join its inaugural intake.

Asked the most important lesson he took from his studies, Napier answers with little hesitation. “Learning to sing in my own voice,” he says – a voice immediately distinctive for its rugged native accent, integral to its richly expressive tones. “Until then I’d really just been imitating whoever I was listening to, but my teachers really pushed me to sing as myself.”

After graduation, Napier initially gained attention for his compelling interpretations of traditional songs, as vocalist/guitarist with multi-award-winners Back of the Moon, one of the 2000s top young Scottish folk acts. His own songwriting first made an appearance on the band’s last album, 2005’s Luminosity, by which time Napier was already collaborating with Highland-based songwriter and producer Nick Turner. The resulting all-original songs appeared on the duo’s self-titled 2006 debut, Queen Anne’s Revenge, and its successor Just One Umbrella, released in 2008, whose subjects included death, drinking, obsessive love, Charles Darwin and nuclear weapons.

Following the band’s rave-reviewed second album, 2011’s File Under Fiction, and feeling the time was ripe to focus on his solo work, Napier secured Creative Scotland funding for a period of mentorship from Hewerdine, one of his long-time heroes. “I loved his music,” Napier says, “but I also knew he was a really good teacher, which not all musicians are.” Right from his initial visit to Hewerdine’s Norfolk home, the pair’s creative chemistry was clear – “The very first night I was there, we wrote three songs together” – and what was intended as six months’ guidance has now developed into a fruitful ongoing partnership.

“Working with Boo, I found I was able to look at what I was doing in a completely different way,” Napier says. “It was partly just getting an outside perspective, from someone I totally respected; partly just seeing how somebody else works. The genesis of all my songs is the words, whether it’s a lyric, a character, or a made-up story, so I’ll come in with that, and Boo will have a whole different take on it, which then helps develop my own ideas.

“I once read that there’s no such thing as writer’s block,” he continues, reflecting on his own process. “People just get stuck in a particular way of working, and eventually run out of inspiration. So I’ve learned to keep changing my system, and working with Nick and Boo has been a key way of doing that. I also sometimes write while listening to other people’s albums, and my latest thing is to go for a run: I take a pen and paper with me, and if I think of a melody, I sing it into my phone.”

While his chosen running routes around Glasgow have further deepened his acquaintance with the city, directly inspiring several songs on the new album, another recent addition to Napier’s creative armoury is his burgeoning comedy career. A longtime fan of the funnyman’s art, he signed up for some beginners’ workshops a couple of years back, after reading Stewart Lee’s analytical account of his craft, How I Escaped My Certain Fate: The Life and Deaths of a Stand-Up Comedian. Dauntlessly taking the plunge into the local comedy circuit, Napier has since progressed rapidly from five-minute open slots to a gig at 2017’s Glasgow International Comedy Festival.

“Part of what blew my mind about the Stewart Lee book,” he explains, “was seeing the similarities about holding an audience, structuring a set, how you make people laugh – and realising the amount of thought he puts into these things. And they’re totally transferable skills: doing the comedy has been a massive help for me playing solo, a massive confidence-builder. Hopefully, it’s made my patter a bit funnier, too.”

In this context, as well as calling himself a folk singer, Napier simultaneously aspires to another, likewise timeless role: “I do love that old-fashioned, all-round idea of an ‘entertainer’ – I think it’s a brilliant thing,” he says. “But then that’s totally what the best folk singers are; they’ll have you in absolute hysterics, in between punching you in the gut – people like Loudon Wainwright, John Prine, Michael Marra: that’s the absolute pinnacle, as far as I’m concerned.”