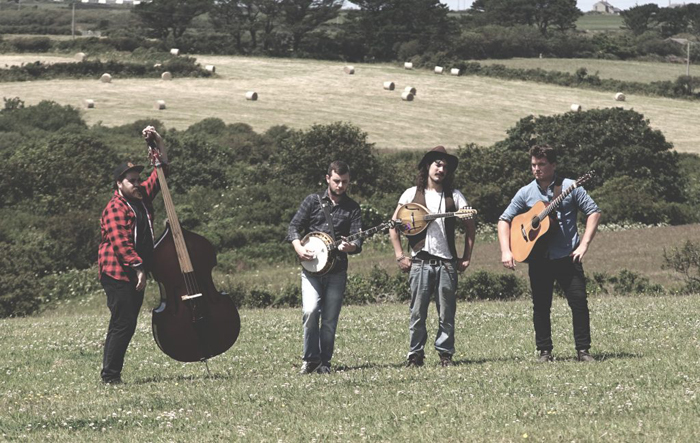 Flats and Sharps are a four-piece bluegrass outfit from Penzance, Cornwall. Delivering energetic, enthusiastic, and spirited Bluegrass to audiences all around the world, Flats & Sharps have been performing their unique take on this music for over ten years.

Their shows include a wide variety of influences, from a fresh and modern outlook on foot-stomping Bluegrass material through to their powerful and well-crafted original songs, with beautiful moments everywhere in between. Their music perfectly blends strong harmonies and stonking solos, their incredible stage presence and energy create an evening that’ll have you dancing, laughing and singing along in no time.

Over their time together, the band have made their presence known all around the world, including multiple tours in Australia, Europe and around the UK.Festival appearances at Nashville Meets London, Cambridge Folk, Isle of Wight, Larmer Tree – to name just a few.

A new album year for the band in 2022 – a truly wonderful collection of virtuosic songs that are sure to only increase popularity as a highly skilled Bluegrass outfit.

“I recommend seeing Flats and Sharps at the earliest opportunity. If you can prove your disappointment, I’ll personally send you a cash refund.” Mark Ellen, R2 Magazine

“The picking is exhilarating, the harmony vocals precise. You can but admire.” Mojo

“One of the hottest new up-and-coming bluegrass bands.” Folkandroutes.co.uk

Support from True Foxes: Formed in 2019, True Foxes are a stunning, female duo from West Cornwall.  Cousins Amie Parsons (Lead Vocals/ guitar) and Chloe Payne (Vocal harmonies/bass) blend together atmospheric harmonies to create hauntingly beautiful melodies. Their music has been influenced by artists including First Aid Kit,The Staves and Bruce Springsteen; this can be heard through the duo’s originals, including new songs ‘Stubborn’ and ‘Sunny’, which have been performed live on BBC Radio Cornwall and many festival stages across the UK. They also put their own acoustic twists on classics such as Go your own way by Fleetwood Mac, Friday I’m in love by The Cure and Best of you by Foo Fighters. Since forming, they have been featured on many radio stations across the county, appeared on BBC Spotlight and performed at around 170 different venues and festivals across Cornwall, Devon and Somerset including, The Eden Project, Acorn Theatre, Lands End, The Plough in Great Torrington, Bodmin Jail, Lusty Glaze, Alverton Hotel, Nancarrow Farm and festivals such as Woofstock, Farnfest, Summer Sounds, Boardmasters, Tunes in the Dunes, Great Estate, Little Orchard, St Ives Festival, Porthleven Food Festival, Watchet Music Festival, PRIDE and the BBC Introducing stages with many more to come!!  Alongside festivals, True Foxes also perform at private events such as weddings and birthdays; contact them via email for more information!