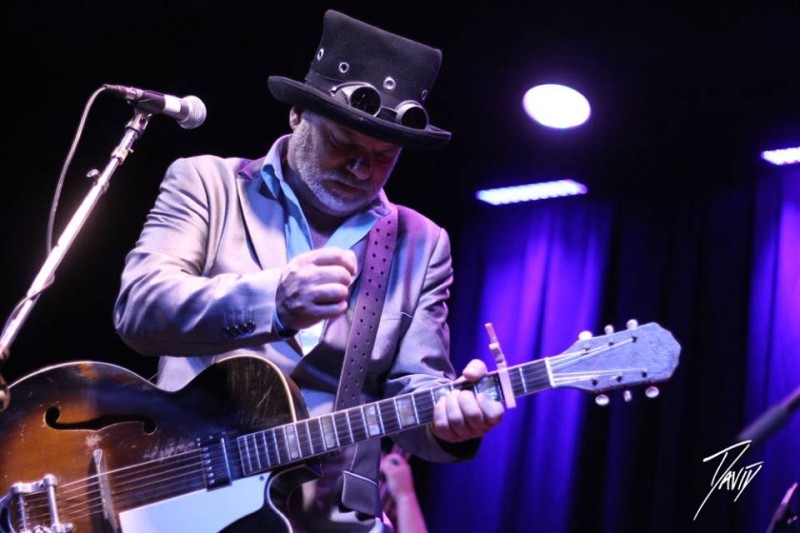 FRED EAGLESMITH: The heart of rock and roll is alive and well with Fred Eaglesmith’s 20th album, Tambourine. Fusing together all of Fred’s past influences, the result is pure rock ‘n ‘roll reminiscent of 1966.

Eaglesmith is a veteran of the music industry and at the same time is about as far away from actually participating in today’s music industry as one could be. Never operating within anyone’s boundaries, he continues to set the standard for independent artists everywhere. While blazing his own often colourful path he has avoided most of the traps and pitfalls of his peers, his career reads like a manual on how to succeed in music today without trying to fit into the traditional business models.

Tambourine was recorded live off the floor using an eight-track analogue console capturing the entire band playing together in the same room. Created during a month long session in an old hall in the hamlet of Vittoria, Ontario, Fred consciously stayed far away from anything that is popular in the mainstream music right now. The result a combination of Eaglesmith’s craftsmanship in songwriting and a fusion of rock ‘n’ roll circa 1966, Motown, and even Tejano influences. Never one to shy away from taking chances with his music and career direction, Tambourine is no exception.

“When I put the songs together for Tambourine, I was thinking about the days when there were five push buttons on an automobile radio,” Eaglesmith explains. “Everyone was listening to AM stations and, at any given time, one of those five buttons was playing a song worth listening to. The album is a walk through the garden of rock ‘n’ roll. The music’s roots are firmly dug in the mid-to-late 60s. The primary essence is 1966 – the year that gave us Bob Dylan’s Blonde on Blonde and Question Mark & the Mysterians.”

Unlike Eaglesmith’s previous recordings the songs on Tambourine are more based on the music rather that the lyrics, often building upon a main guitar riff or bass line. The days spent recording in Eaglesmith’s one room studio were long and arduous. Often arrangements would be worked out on the spot and with the band playing numerous live takes in the studio.

On the other hand, like a lot of Eaglesmith’s albums, Tambourine mixes rock ‘n’ roll and R&B with richly drawn characters, meaty themes and stunning turns of phrase. The opening track, “What it Takes,” is a song that touches upon a subject Eaglesmith is no stranger to: dedication and perseverance. The plaintive rock anthem with an irresistible beat “Can’t Dance,” lends his voice to young and old alike in an age of musical genre boundaries. Eaglesmith’s vocals fit perfectly to the heartfelt lyrics of “Engineer,” a broken hearted man’s plea for peace, and in “That’s What You Do,” a narrative set to the band’s spacious and soulful playing. The band shows their musicality and versatility on the Tejano influenced “Small Town.” The driving, soul-infused “Nobody Gets Everything,” is a splendid breakup tune with universal resonance. “Sally Green” gives a psychedelic, gospel-esque portrait of the girl you hate to love. Tambourine closes on the blue, brooding song, “Whip a Dog,” with Eaglesmith and the band locked into a deep hypnotic groove.

Eaglesmith, a songwriter’s songwriter, has a depth that is informed by miles of experience as a true road dog. Fred is not only the star of show but also the bus driver and chief mechanic while on tour, keeping him and his band on the road. Unlike many of today’s artists, touring is not something he does some of the time or only in support of a new record. Touring is his life and The Fred Eaglesmith Travelling Steam Show is one of the last full time travelling shows today. Their busy itinerary added up to more than 270 days on the road last year and saw Fred only returning home long enough to play a handful of local shows and to go into the studio to record the new album.

A typical day in the life of Eaglesmith will find him driving an average of four to eight hours between shows in his converted 1990 Bluebird tour bus. He outfitted the bus with a system of filters and pumps which he designed himself to enable them to run on waste vegetable oil recycled from deep fryers in venues and restaurants along the road. This past year included seeing Fred astonish many local mechanics by changing his own blown bus transmission on the side of a highway in rural Alberta without missing one gig.

Adding a touch of the theatrics to every show, Eaglesmith dubbed his band The Traveling Steam Show and they began performing in steampunk-ish outfits a few years ago when he released his Latin-influenced rock album Cha Cha Cha. “It harkens back to the ’60s and ’70s variety shows that were on TV,” Eaglesmith told the Albuquerque Journal. “It’s a show. It’s a lot more than a concert. I like to pay attention to what’s cutting edge and bring that into the live show.”

And with such great attention to giving the best in his performances both live and recorded, critics have taken notice. The Bend Bulletin praised Fred as “a singer-songwriter with a loyal fan base: a raconteur known for his funny stories and sometimes funny, sometimes poignant songs…a figure to whom ‘entertainer,’ ‘humorous’ and ‘original’ can be applied in equal measure.” And the Los Angeles Times, in a live review, noted: “Eaglesmith snarled out lyrics that underscore his overriding attitude that music and musicians ought to be cherished in the here-and-now and valued for the quality of their art, not the size of their bank accounts or TV ratings.”

Eaglesmith’s songwriting has also earned him multiple International awards and his songs have been covered by some of the biggest names in Nashville including Toby Keith, Alan Jackson and Miranda Lambert. His music has been featured in films and television scores including those of True Blood and Grimm. Fred and his band have also performed as the musical guest on Late Show With David Letterman. This past year has also seen the launch of a highly successful musical theatre production Dear Johnny Deere inspired by and based on Fred’s songs.

Despite all of these accomplishments you are more likely to see him playing to 150 of his fans in a small town community hall rather than at a large capacity theatre or concert venue. Likewise it is more probable to hear about his next show via a hand-stencilled roadside sign and to find Fred sleeping in his bus in a Walmart parking lot or local campground over a 5-star hotel.

Tambourine reaffirms Fred Eaglesmith’s rock ‘n’ roll odyssey and is some of his most comprehensive work yet. The band’s musical cohesion shows how tried and true his Travelling Steam Show really is and the level of production and engineering brings it all together to set a new bar of originality and creativity.