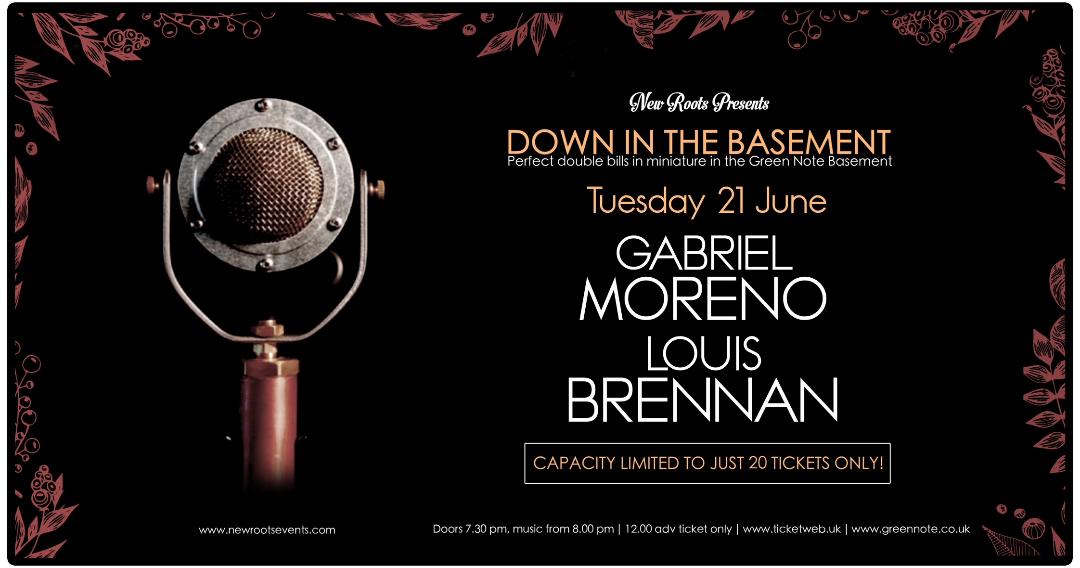 GABRIEL MORENO is a singer songwriter and poet with more than 10 poetry books published in both Spanish and English from 2007 to 2015 with Omicron Publishers and Annexe, London. He has released four albums in the UK, Love and Decadence 2015 and Farewell Belief 2017, Whiskey With Angels 2020, The Year Of The Rat 2022, featuring his own unique strand of alternative folk with a Mediterranean touch.

He is Gibraltar’s Cultural Ambassador for 2022 and winner of the Introducing Stage at The Great British Folk Festival, and consequent performer on the festival’s main stage in 2021. Moreno was hailed as ‘an offshoot of Leonard Cohen and Neil Diamond’ by  BBC6 Radio’s Cerys Mathews, and has received extensive praise from Americana and alternative folk & roots press, including Folk Radio Uk, Americana Uk, God is In The TV and a host of regional and national BBC folk shows.

London-based Dubliner LOUIS BRENNAN is a singer-songwriter in the folk tradition. His folk however aren’t the field hands and travelling minstrels of yore but the repressed middle managers and ennui-ridden urbanites of late-stage capitalism. They populate tales of bad sex, half-drunk commutes and interpersonal claustrophobia delivered in Brennans cracked baritone, at times embarrassingly intimate, at times spuriously broad, peppered with pitch-black humour.

His debut album Dead Capital was recorded at Berlin’s Candybomber Studio, located in the now-defunct Tempelhof Airport. Produced alongside acclaimed Irish songwriter A.S. Fanning and legendary engineer Into Krauss, whose credits run from noise-merchants Einsturzende Neubauten to tango pioneer Astor Piazolla, Dead Capital brings together a body of work shaped through dozens of live shows in London and further afield. It was released to critical acclaim in February 2018 with For Folks Sake remarking ‘Dead Capital is an overwhelmingly beautiful album forged from hopelessness’. He plays this evening accompanied by a full band of drums, bass, pedal steel, guitar and keys.

‘A master storyteller with a voice like rolling thunder’ – GQ Magazine